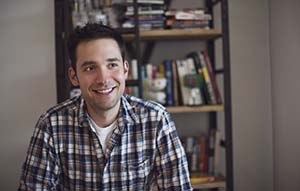 Alexis Ohanian, founder of the popular social networking and entertainment website reddit.com, will discuss and sign his new book, Without Their Permission, during a national book tour stop at Case Western Reserve University on Monday, Feb. 10, at noon in Thwing Center ballroom. The event is sold out and tickets will be checked at the door. To live stream the event, visit tv.case.edu/caselive/.

Ohanian, described by Amazon.com as the personification of the “dorm-room techie entrepreneur,” will discuss his launch of reddit.com in 2005 as a newly minted University of Virginia graduate, and its sale a year later to Condé Nast Publications.

Ohanian, from Brooklyn, N.Y., now invests in and advises more than 70 tech startups and features many of those and other New York tech startups on a show called “Small Empires” on The Verge.

Alex Yakubovich, a Case Western Reserve alumnus and co-founder of the online restaurant ordering enterprise Onosys Ltd.—which was sold to LivingSocial Inc. in 2012—will join the conversation.

Ohanian’s upcoming appearance was initiated last fall by Michael Goldberg, visiting assistant professor of design and innovation at the Weatherhead School of Management, through a family friend who works with Ohanian.

Ratner, 20, from Scotch Plains, N.J., felt so empowered after becoming a regular viewer of Ohanian’s program on The Verge—and a Reddit fan—that, not knowing plans were already in the works, he emailed Ohanian’s group, selling Case Western Reserve as an ideal addition to the book tour schedule.

“He’s a little bit of a personal hero of mine,” Ratner said. “I had nothing to lose.”

So the combined efforts of a few, much like the momentum behind any successful startup, is the university’s gain.

Blackstone LaunchPad, the university’s Career Center, Weatherhead School of Management and IDEA (the entrepreneur club) are sponsoring the event.

For more information about Ohanian and his book, visit withouttheirpermission.com.