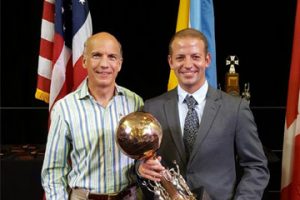 Recently, 2016 CWRU graduate Ethan Pickering was awarded Sigma Chi Fraternity’s International Balfour Award. This award is given annually to the fraternity’s most outstanding graduating senior. Pickering is the only Sigma Chi from Case Western Reserve University to ever be awarded this honor in its 90-year history.

Pickering has been an outstanding member of the Case Western Reserve community through both his academic and co-curricular commitments. While at CWRU, Pickering earned a 4.0 as a mechanical and aerospace engineering undergraduate and as a master’s student in the mechanical engineering program. He was a member of the varsity baseball team from 2011-2014, a member of Tau Beta Pi and contributed significantly to the Greek community.

While an undergraduate member of Sigma Chi, Pickering served the chapter as accountability chairman, house manager, chapter editor, historian, ritual chair and, finally, president. After his term as president, Pickering stepped into the role of president of the Interfraternity Congress. During his term, he worked hard to establish Greeks Against Sexual Assault (GASA) and remained a member of Order of Omega, a leadership honors society. In 2015, Pickering was awarded the recognition of IFC President of the Year and also received the Glenn Nicholls Character of Distinction Award from the Greek community.

As the 90th International Balfour Award recipient, Pickering will serve for two years on Sigma Chi’s board of directors and received a $10,000 scholarship towards his PhD study in Mechanical Engineering at California Institute of Technology, which he will begin this fall.

Vice President of Student Affairs Lou Stark wrote a recommendation for Pickering for the Balfour Award process. “Ethan is my description of a very well-rounded student,” he stated. “His impact on his chapter, the Greek system and this university has been nothing but outstanding.

Mark Starr, director of Greek Life at CWRU had similar remarks. “Pickering is a great role model of what a fraternity man can and should be. He made great contributions both to his chapter and our community during his time as an undergraduate. He is well deserving of this honor.”

“Those who I have met and interacted with at Case Western Reserve have been the ones to propel me in my successes and push me through failures,” said Pickering about his time at CWRU. “The community here has always cared for me, in particular on the individual level, and I have found endless mentors—professors, administrators and staff. Making them proud has been a huge motivator. I am incredibly proud to have Case Western Reserve 2015, next to my name as an International Balfour Award winner.”