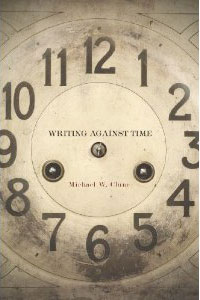 The initial excitement of hearing a new song fades as it’s replayed to death. That’s because the brain naturally functions as a kind of ticking time bomb, obliterating the thrill of artistic sounds, images and words by making them familiar over time.

In his book, Clune explained how neurobiological forces designed for our survival naturally make interest in art fade. But the forces don’t stop artists from trying for timelessness.

While the phenomenon is true for all art, the assistant professor of English focused on the intersection of literature and science, describing what writers can do to block or slow that natural erosion over time. Clune builds on his interest in how the brain destroys a lasting enjoyment of art. He has written about and reported on the topic in the neuroscience journal Behavioral and Brain Sciences.

The brain gradually defeats that initial excitement with boredom, which Clune described as “this dull feeling that your senses have died.”

As writers fight to ward off the reader’s boredom with striking new forms, metaphors and images, the brain works just as fast to extinguish it.

“We are evolutionarily designed so that we focus on new objects and ignore familiar ones,” Clune said. “When the mind confronts a new object, our perception is intense and vivid, but it soon dies with familiarity. Every minute, this feeling fades as the mind grasps the object.”

Many writers in the Romantic tradition are animated by an ambition to indefinitely extend that intensity. Clune wrote about the strategies some literary greats have used to slow the brain’s familiarity and create a never-fading image. Vladimir Nabokov’s literary images, for example, imitate the look of an addictive sexual object. Neuroscience, Clune said, has shown that levels of the neurotransmitter dopamine, which is linked to pleasure, are similar to the first shot of heroin—and the first look at artwork.

“Where science can learn from literature is that it’s not re-creating the feeling of the first experience of the drug encounter, but that initial imagery associated with the intensity,” he said.

Poet John Keats and philosopher Immanuel Kant were able to create a blueprint for a kind of melody that remains in short-term memory but resists being encoded in long-term memory, where it becomes habitual and the freshness fades.

For example, in Keats’ Hyperion, the poet wrote about a string of successive notes heard as one. “It will stay fresh, vivid and intense when encountered again and again,” Clune said.

Poet John Ashberry has been able to overcome the mind’s natural boredom by creating poetic images that imitate artifacts from an unknown or nonexistent culture. Out of context, and without a sense of shape, it keeps the mind active in searching but never finding, said Clune. The artifact combines an inkling of familiarity with the unknown, but just enough to keep the mind alert and aware of the object.

Literary immortality also is achieved by immersing the reader in an extraordinary experience outside the realm of their reality. George Orwell’s 1984, for example, creates that kind of fictional world.

Vagueness also can work to keep the mind active. It isn’t about a good or complicated plot in the story, Clune said, adding that the mind gives up its natural inclination to turn information into a memory when that information is too strange.

Clune found that empathy in writing also is a time-stopper, allowing readers to step inside an experience unlike his or her own.

Scientists have an opportunity to learn from writers’ insights into this neurobiological time, Clune said.