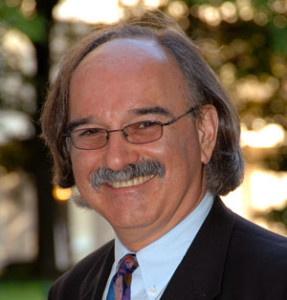 Daniel A. Scherson, the Frank Hovorka Professor of Chemistry.
Photo by Mitch Jacoby.

A Case Western Reserve University chemistry professor was one of just a select few national energy experts invited to testify before a U.S. House subcommittee Wednesday.

His message: More federal spending on the basic science of electrochemistry is critically needed.

“I want them to understand where electrochemistry fits in many aspects of our lives,” Daniel Scherson, the Frank Hovorka Professor of Chemistry, said prior to testifying.

The Committee on Science, Space and Technology Subcommittee on Energy asked Scherson to testify about research in electrochemistry, focusing on energy storage.

Scherson planned to stress that theory, often based on computational chemistry, is driving much of the research.

“Computational chemistry has become so good that predictions now are taken seriously,” he said. “The interplay between theory and experiment—prediction versus validation—is greatly contributing to further refinements, leading to higher batting averages and faster progress.”

In cases where the factors controlling certain properties are not known, computers and new fast-screening technologies are allowing experimentalists to test a large number of materials for certain qualities in much less time, providing clues to theoreticians to determine what makes the materials tick, he said.

In addition to conversion and storage of electricity, electrochemistry is at the heart of sensor technology to test blood and monitor diabetes. It’s also behind exciting new developments in deep brain electrical stimulation to control and manage disease such as Parkinson’s and to control corrosion on the nation’s bridges and ships.

Scherson has served as a vice president and just finished his one-year term as president of the more than 8,000-member Electrochemical Society. He is a member of the Advisory Board of the Joint Center of Energy Storage Research, led by Argonne National Laboratory, and the Fluid Interface Reactions, Structures and Transport Center Energy Frontier Research Center (EFRC) at Oak Ridge National Laboratory. He is also chairman of the advisory boards of two EFRCs: the NorthEast Center for Chemical Energy Storage at the State University of New York, Binghamton, and the Center for Electrochemical Energy Science at Argonne National Laboratory.