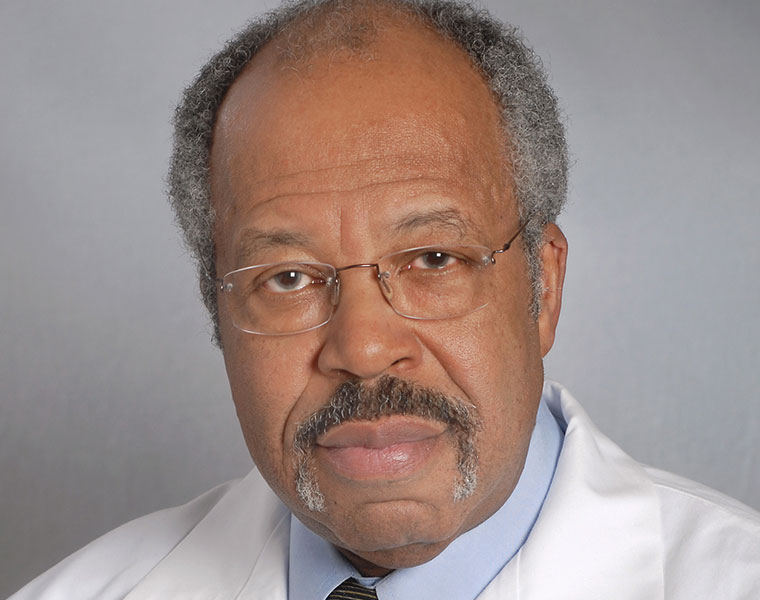 Wright, emeritus professor of medicine at Case Western Reserve University School of Medicine, is a global authority on evaluating and managing hypertension, particularly in African-Americans. He has had senior roles in nearly all major clinical trials conducted in that population over the past three decades. His contributions include new treatment approaches for high blood pressure and raising awareness of the need for more minority subjects in clinical research.

As a result of these achievements (and many others), Wright will receive the 2017 Frank and Dorothy Humel Hovorka Prize, one of the University’s highest forms of recognition.

He will be presented with the award during commencement ceremonies on Sunday, May 21.

A chemistry lab under the Christmas tree

Wright, a native of Pittsburgh, credits his hard work and passion for learning to strong family support. After serving in World War II, his father went to college on the GI Bill during the day and worked at night to support the family. “He always taught my siblings and me the importance of effort and persistence,” said Wright, the eldest of four children and his father’s namesake.

“As is the case with many researchers, I had my initial exposure to science via the chemistry set under the Christmas tree,” he said. “I am a survivor of several unplanned explosions and fires resulting from my creative experimentation with said set.”

None the worse after the blasts, as a teen Wright set a goal of going into chemistry. In college (at Ohio Wesleyan University), he heard a lecture from a pharmacologist that sparked an interest in combining his love of chemistry with medical research. This led to receiving an MD and PhD (pharmacology) from the University of Pittsburgh.

Hypertension, race and the Wright way

“Hypertension is a huge problem worldwide and endemic to the African-American community,” Wright said. “Everyone in my family had it, and my blood pressure was on its way up when I started in medicine, so I had a vested interest in studying and fighting the disease.”

Over his career, he has published extensively in this area (more than 300 articles, abstracts and book chapters) and served on many national and international advisory panels.

For decades, clinicians knew that high blood pressure was more common in African-Americans than Caucasians. But because too few African-Americans were included in hypertension studies, researchers weren’t aware of the often dramatic difference in symptoms and successful treatment approaches between the two races.

To address this deficiency, Wright became, and remains, an advocate of recruiting sufficient numbers of minority subjects in clinical trials (as well as more African-American investigators). The recruitment methods that he developed in his early studies decades ago are still used today.

In one of his pioneering studies, he was corresponding author on both the primary results paper and one presenting results by race for the Antihypertensive and Lipid-Lowering to Prevent Heart Attack Trial (ALLHAT), the largest-ever investigation of hypertension treatment. ALLHAT found that, comparing average wholesale cost to pharmacies and hospitals, a ten-cent a month diuretic was as effective as $70-a-month ACE inhibitors, alpha blockers and calcium channel blockers in preventing cardiovascular and kidney disease.

Most recently, Wright was lead author of a New England Journal of Medicine piece on the Systolic Blood Pressure Intervention Trial. SPRINT received extensive global coverage, including major stories in The New York Times. It found that lowering systolic blood pressure to <120 mmHg, instead of the usually recommended <140 mmHg, resulted in approximately 25 percent lower risk of cardiovascular events and almost 30 percent reduction in total mortality. The American Heart Association and the American College of Cardiology have been charged by the National Institutes of Health to draft new guidelines for treating hypertension incorporating these findings, with final publication anticipated by the close of the year.

“I’m still doing the things I’ve always enjoyed doing,” said Wright. “I chair the publications committee for the SPRINT trial. I’m also involved in two other grants addressing hypertension, one focusing on chronic renal insufficiency, the other aimed at lowering blood pressure in Medicaid recipients. I used to say I spent 50 percent of my time on research, 50 percent on caring for patients, 50 percent on teaching and 50 percent on administration. As an emeritus faculty member, I’ve cut down on those numbers—but not by much.”