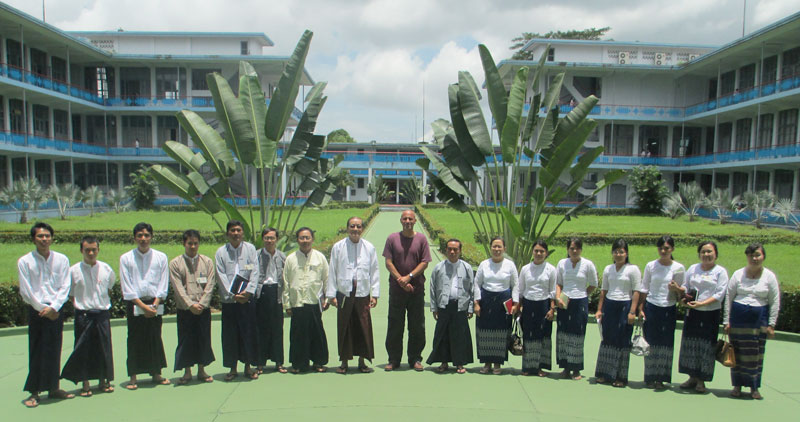 Last year, the Republic of the Union of Myanmar held free, peaceful elections—the first since its military government took hold in 1962. Now, as leaders rebuild and restructure the country and its education system, Daniel Lacks, the C. Benson Branch Professor of Chemical Engineering, is there to help.

Since 1962, the people of Myanmar (also known as Burma) have witnessed violent protests, human rights violations and censorship. In the late 1980s and again in the 1990s, following student protests, the government shut down undergraduate programs at major universities, leaving small regional schools as the only universities open, Lacks said.

Recently, things have started to change, with an opposition party winning most open seats in the election and censorship being lifted; because of this reversal, the U.S. has lifted most sanctions against Myanmar, and President Barack Obama and former U.S. Secretary of State Hillary Clinton made historic visits to the country.

And, in 2012, the undergraduate university programs reopened.

To help facilitate a smooth reopening, Lacks is in Myanmar assisting with curriculum development and accreditation and running faculty programs at the Yangon Technological Institute, a top engineering school in the country. In addition, he met with the U.S. Embassy to discuss strategies for how the U.S. can help universities in Myanmar.

He is there as part of the Fulbright Specialist Program, which offers short-term projects in areas of need. He will return to the U.S. this weekend, after spending two weeks in the Southeast Asian country. Lacks then will travel back to follow up in December, at which point he hopes to bring a few Case Western Reserve students.

As the undergraduate programs have been closed for such a long time, reopening them will be a slow process, Lacks explained; they have only first-year students on campuses this year, then first- and second-year students next year, and so forth.

Plus, in the 20-some years these programs have been shut down sporadically, they have fallen dramatically behind by today’s educational standards.

Even at the top schools, such as Yangon, the educational lessons are very traditional; not only do faculty members simply lecture to students, but they also solve problems only with pencil, paper and calculator.

In addition, the curriculum is vastly different than that in the U.S. For example, they require courses in engineering drawing by hand, and there is little (if any) emphasis on communication or humanities/social sciences, Lacks said. Plus, they take eight courses per semester and spend more than 30 hours per week in the classroom, learning specific applications of engineering rather than the fundamental principles taught in the U.S.

“They have a lot of required courses that are very applied and specific to certain industries,” he said. “For example, one course required for all chemical engineering students … covers ‘preparation of cordials, jam, jelly, marmalade.’”

So Lacks holds workshops with faculty members and graduate students to introduce them to contemporary engineering education.

“My workshops introduced them to the more modern approach, both in terms of teaching style—active classrooms where students work in teams with hands-on exercises—and content,” Lacks explained. “Real engineering problems generally can’t be solved by pencil, paper and calculator, so I teach how to use spreadsheets to easily obtain numerical solutions to complicated problems.”

The response, Lacks said, has been tremendous, with the faculty enthusiastic about his training and ideas. Nearly all of them have been educated in Myanmar, so they are unfamiliar with other educational systems.

In one presentation to the university provost, deans, department heads and faculty on U.S. and Myanmar engineering curriculums, he said, the audience was surprised by the stark contrast in education.

“One person commented that he wouldn’t have believed this is what the U.S. curriculum is like if it hadn’t been presented by an American,” Lacks said.

This is the third time Lacks has helped lead development programs for engineering faculty living in countries where political problems have disrupted the university system. Last summer, he ran a program for faculty from Iraq, and this summer he’s leading another for faculty from Libya. The 10-week programs, both of which are Fulbright-sponsored, brought eight faculty members to Case Western Reserve for in-person learning from CWRU faculty.

However, this is the first time Lacks has gone abroad to work directly with the faculty members at their own university. The experience has opened him up to their culture, allowing him to travel to places such as Bagan, in the middle of the country, which is filled with Buddhist temples from 800 to 1200 A.D., Lacks said.

“There are so many temples over such a large area that you rarely run into people. It’s very tranquil, and you can ride a bike around the dirt roads and explore the ancient temples without seeing anyone else,” he said. “It is perhaps the most spectacular place I’ve ever been.”