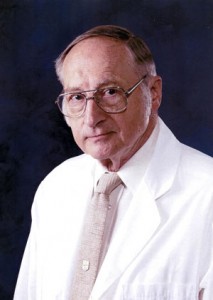 Robert Eiben (ADL ’44, MED ’46), professor emeritus of pediatric neurology and local pioneer in the treatment of polio, died Saturday as a result of complications from congestive heart failure. He was 91.

Eiben worked at MetroHealth following his residency until accepting a fellowship in neurology at University of Washington. In 1963, he returned to MetroHealth as the leader of the hospital’s efforts in children’s neurology. He focused in particular on research relating to cognitive and other brain-related challenges low birth-weight babies face. His work attracted such acclaim that he went on to become the acting chief of Clinical Investigations and Therapeutics, Developmental and Metabolic Neurology Branch of the National Institute of Neurological Disorders and Stroke from 1976 to 1977. He also held multiple leadership roles in the Child Neurology Society, including serving back-to-back terms as president.

Among Eiben’s awards are recognition from the Fourth International Congress of Poliomyelitis for his work on respiratory centers, induction into MetroHealth’s Hall of Honor, and the establishment of The Robert M. Eiben, MD Lecture in Pediatric Neurology at the School of Medicine.

Calling hours will be Friday, Jan. 3, from 3 to 7 p.m. at the McGorray-Hanna Funeral Home (14133 Detroit Ave., Lakewood). Eiben’s funeral will take place at 10 a.m. Saturday, Jan. 4, in the Cathedral of St. John in downtown Cleveland.