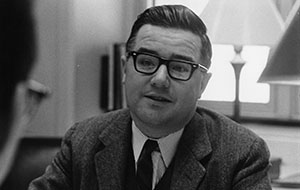 The year after Harvey Buchanan retired from Case Western Reserve in 1988, the university and Cleveland Museum of Art began holding an annual lecture in his name, to recognize the indelible impact he had on the arts in the area.

This year, the lecture will have a layer of sorrow, as Buchanan, professor emeritus of humanities and art history and provost emeritus, died Feb. 19. He was 92.

The lecture, held April 22 at 5:30 p.m. in the museum’s recital hall, will include a tribute for Buchanan delivered by Jenifer Neils, the Elsie B. Smith Professor in the Liberal Arts, and Marjorie Williams, senior director of endowment development at the Cleveland Museum of Art.

Throughout Buchanan’s storied career—which spanned more than 30 years from the 1950s to 1980s at Case Institute of Technology and Case Western Reserve—he held many roles, from instructor to chair of the Department of Arts to provost of humanities and the arts. 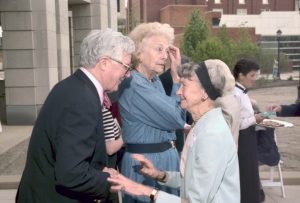 Thelma Smith with Dr. and Mrs. Harvey Buchanan at Campus Greens dedication in 1997.

Buchanan was instrumental in establishing Case Western Reserve University’s joint PhD program with the Cleveland Museum of Art, which offers students the opportunity to learn both about art history and museum studies. The program was first offered in the 1960s and continues to prepare students for careers in art history.

Buchanan took on significant leadership positions shortly after the federation of the Case Institute of Technology and Western Reserve University in 1967. He served the roles of dean and provost for the arts and humanities at the new university. He worked to obtain funding through gifts and grants for endowed professorships and chairs.

At an international level, Buchanan represented the university as a member of the Case Ford Foundation Evaluation Team (Survey of Higher Education in Mexico in 1965); on the Kanpur Consortium Committee at the Indian Institute of Technology (1966-68); and as dean, he created the CWRU summer program for advanced French studies in Montpelier, France.

“With his shock of white hair, his ubiquitous bow tie and his wide smile, you couldn’t miss Harvey Buchanan on campus,” Neils said of Buchanan.

Buchanan hired Neils in 1980 and served as a mentor to her for 35 years, becoming the person she often turned to when she needed advice after replacing him as chair of the department.

“His deep knowledge of and abiding commitment to the university, to University Circle and to many art institutions in Cleveland were extraordinary,” Neils said. 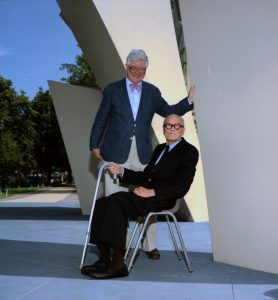 Harvey Buchanan and Philip Johnson in 1997.

Combining his dedication to art and the area, Buchanan took on the role of director of the John and Mildred Putnam Sculpture Collection, artwork commissioned and installed on campus, in 1981.

Under his direction, the collection grew to include about 50 works, all from regional artists. The collection includes such works at Spitball, Unstable Tables and Merging.

In 2005, in recognition of his efforts in curating and caring for the collection, he received University Circle Inc.’s Joseph D. Pigott Leadership Award, which honors individuals for their contributions to the area.

“[Buchanan] had the most appealing qualities of sharp intelligence combined with an extraordinary ability to make connections with people,” Alan Rocke, Distinguished University Professor and Henry Eldridge Bourne Professor of History, said. “He always had a smile for everyone.”