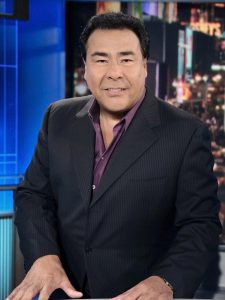 The free, public address—sponsored by the Office of Inclusion, Diversity and Equal Opportunity—will begin at 4:30 p.m., on Monday, Oct. 7, at the Iris S. and Bert L. Wolstein Research Building.

Quinones earned seven Emmys for his coverage of such stories as the 2010 Chilean mining disaster, where he was the first of 2,000 journalists on site to capture an interview with one of the survivors. He also has reported on women forced into polygamous marriages in a northern Arizona religious sect and Mexicans seeking to come into the United States along a dangerous route dubbed, “The Devil’s Highway.”

In his acclaimed series, What Would You Do? Quinones presents people with ethical dilemmas that involve race, gender, age and other societal factors.

In his work and talks, Quinones often shares his sensitivity of growing up in family of migrant workers and how those early roots in the dusty fields led him to his career as a journalist and ABC’s first Latino reporter. He also delivers the message of pursuing dreams and stresses the importance of an education to make those dreams possible.

Quinones joined ABC’s World News Tonight with Peter Jennings in 1982 as a general assignment reporter based in Miami. He worked his way into the national evening spotlight from his early days as a news editor at KTRH radio in Houston, Texas, to reporting for WBBM-TV in Chicago, where he was a two-time Emmy winner for reporting about illegal aliens from Mexico.

His work has received numerous honors, and, in 2005, he was highlighted as one of the 25 most prominent U.S. Latinos in the Smithsonian exhibit, “Our Journeys/Our Stories: Portraits of Latino Achievement.”

The Power of Diversity series continues with John H. Flores, assistant professor of history, who will speak on Latino diversity in America on Tuesday, Oct. 29, at 3 p.m. in Thwing Center’s 1914 Lounge (second floor). A historian of Mexican and Mexican-American history, he will give the talk, “The Brown Power Movement of the 1920s:  Reinterpreting Mexican Chicago.”

Reservations for the events are recommended by emailing diversity-rsvp@case.edu.

For information, visit case.edu/diversity or email Janetta Hammock in the Office of Diversity and Equal Opportunity at janetta.hammock@case.edu.