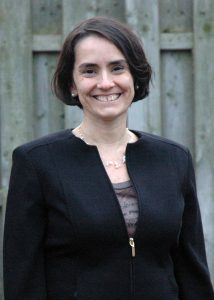 This order, Lasso argues, started a landscape transformation that was as impressive as the construction of the canal itself.

Lasso, one of 30 humanities fellows, will spend the next year on a research leave at the National Humanities Center in North Carolina’s Research Triangle area, writing Building La Zona. She also will engage in discussions with the other fellows from the U.S. and abroad, as well as attend and present lectures.

She was one of 65 applicants who received the ACLS award.

The idea for Lasso’s project came by happenstance while she researched the urban history of Colon, Panama. In searching the U.S. National Archives, she found documents about towns that once thrived in the zone but had been depopulated and their people displaced.

“I realized that we did not know anything about this important aspect of Panama’s urban past—what these Panamanian towns looked like, how they were governed or how people negotiated their expulsion and relocation,” the associate professor of history said.

Lasso also discovered an interesting moment in political experimentation. The U.S.  Canal Zone government considered Panamanians residents of the zone and appointed them judges or mayors—a fact that had been erased from both Panamanian and American histories.

To reconstruct the history of these towns, Lasso researched the U.S. National Archives and Library of Congress in Washington, D.C., and various Panamanian archives and libraries.

Lasso also found many myths about the canal’s construction. One was that people along the canal lived in stick huts and were uncivilized. From her research, it was quite the opposite. Towns were cosmopolitan. Instead of jungle villages, they resembled mining towns with wooden clapboard homes and a main street filled with stores.

Americans promoting this myth gave rise to the concept of Latin America as a developing region, one of the themes in her book. She wants to “understand how the U.S. and Latin America ceased to be imagined as fellow ex-European colonies and New World republics, and instead started to be portrayed as dramatically different regions,” she said. “One became ‘Western and developed’ and the other ‘non-Western and underdeveloped.’ Panama was an important part of this process.”

Lasso said she wants Panamanians, who now own the canal and its lands again, to know this history and to look back in forging a future in “La Zona.”

Building La Zona will be the second book written by Lasso, a specialist in Latin American and Caribbean history. The first was Myths of Harmony: Race and Republicanism during the Age of Revolution, Colombia, 1795-1831 (Pitt Latin American Studies).