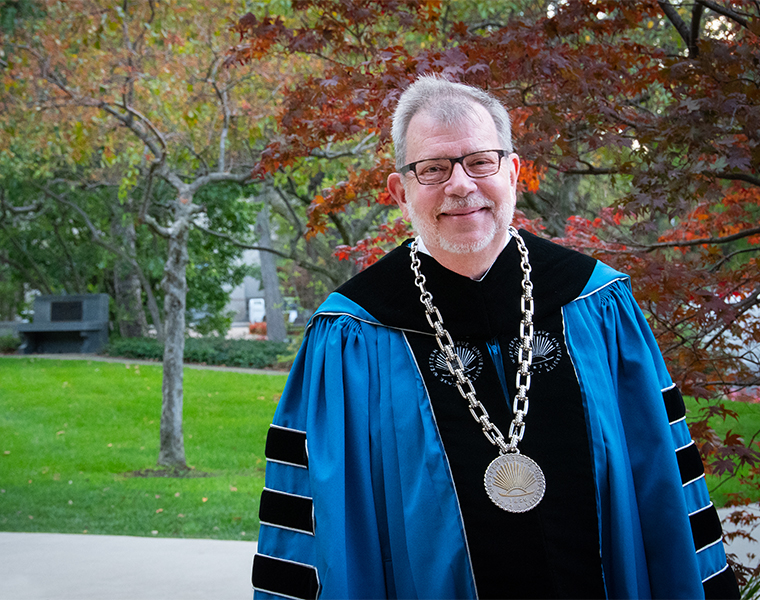 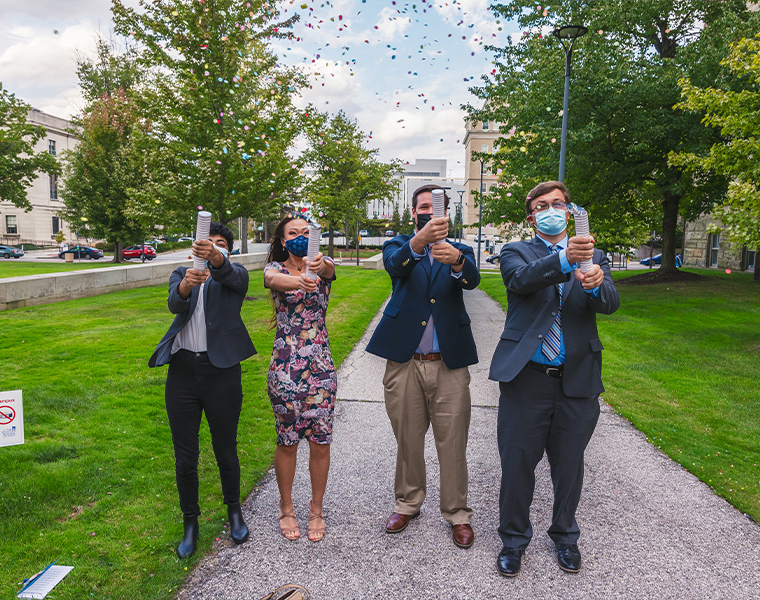 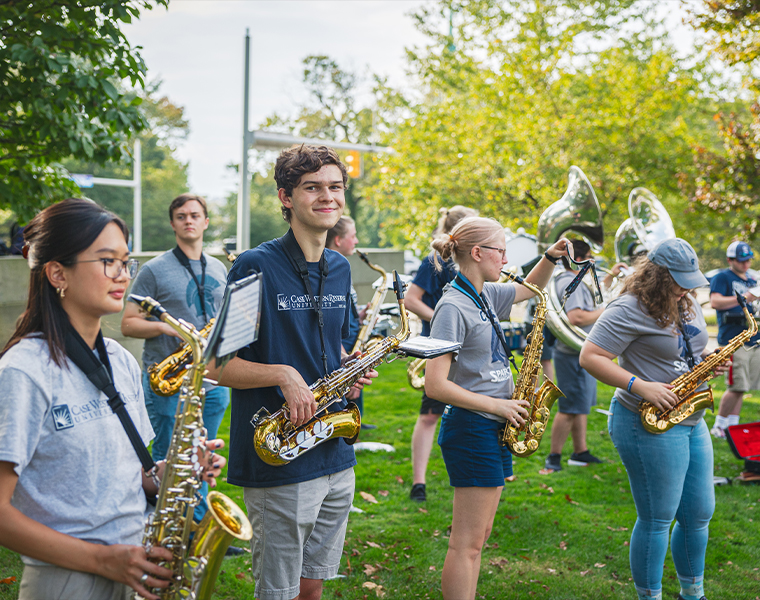 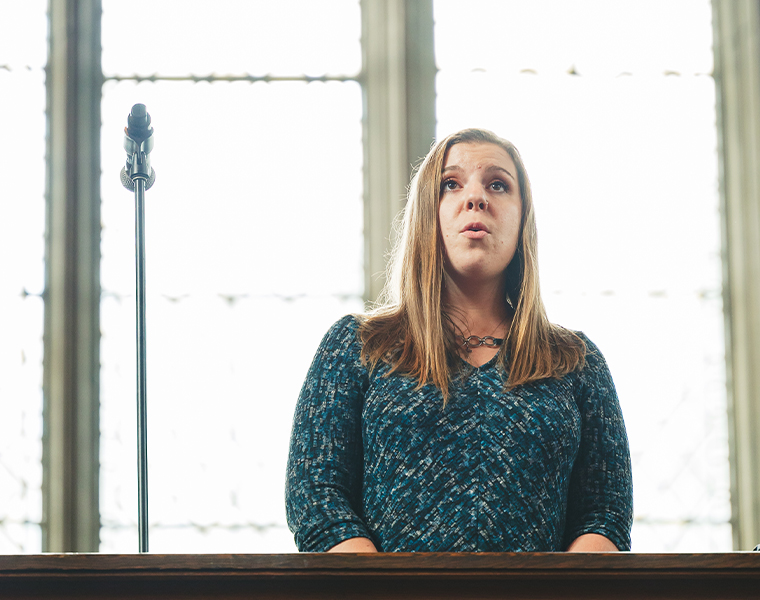 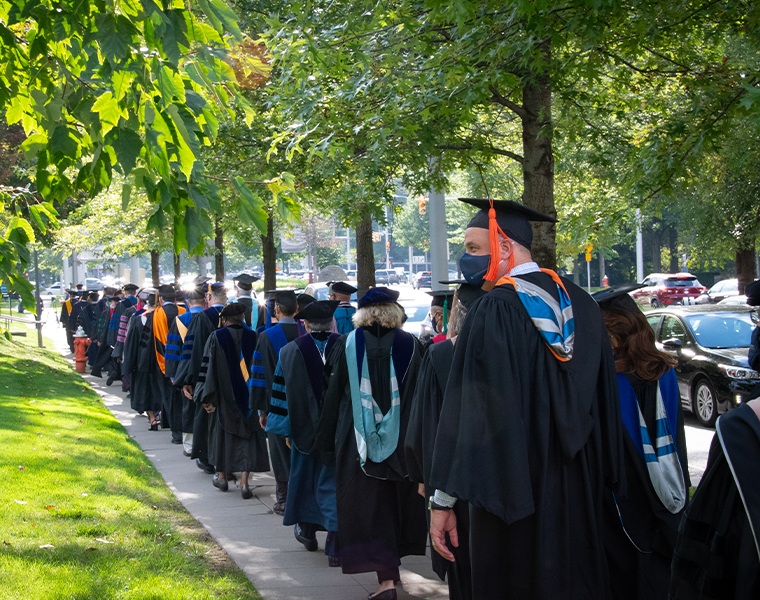 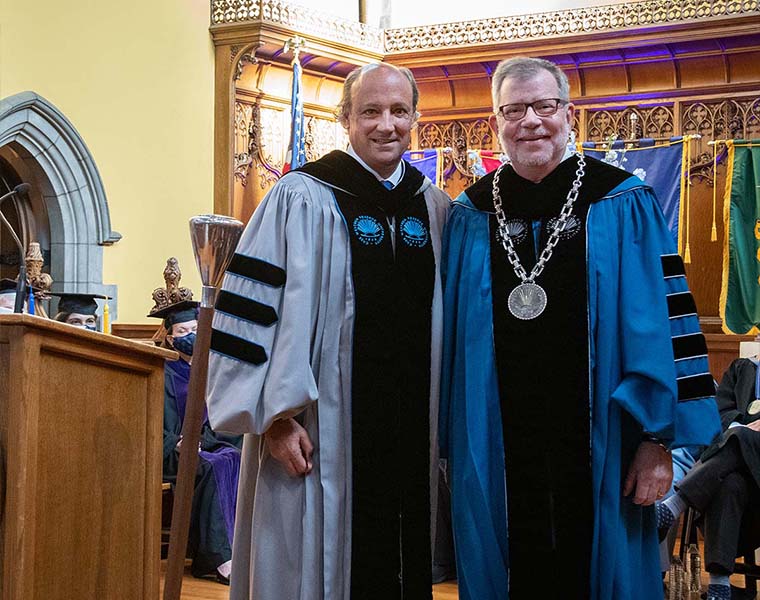 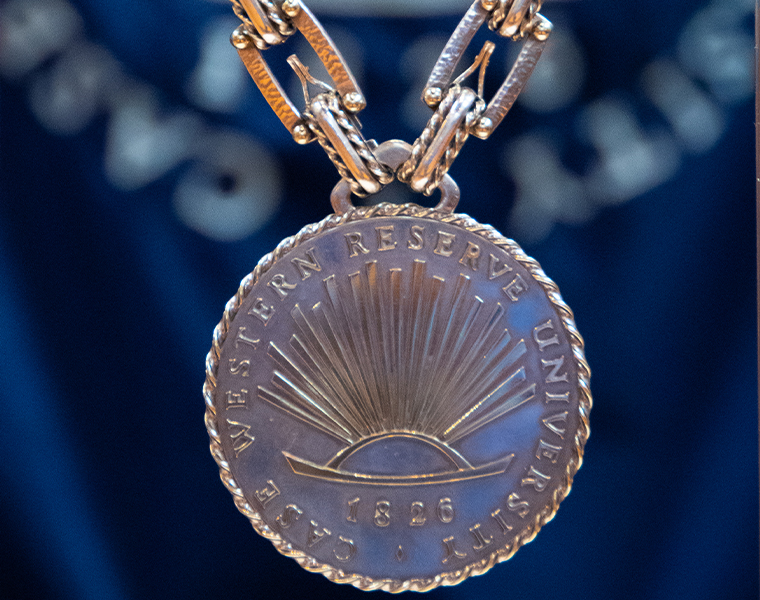 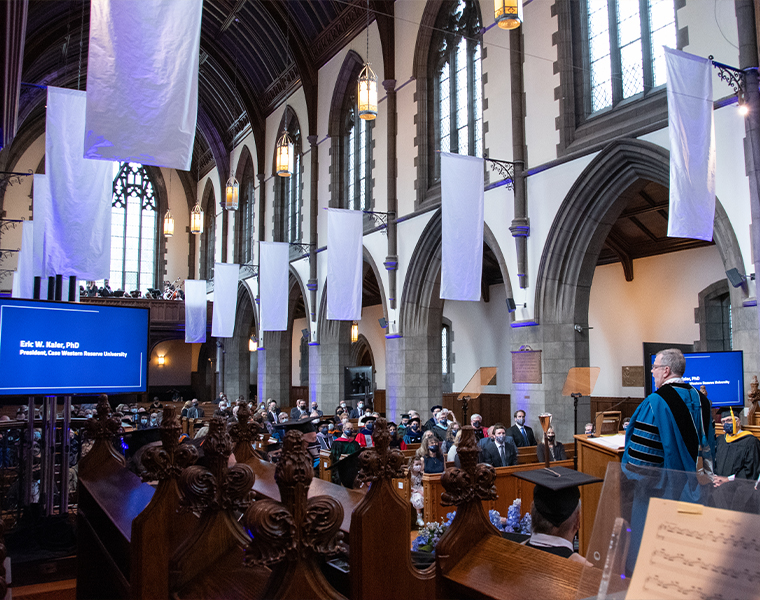 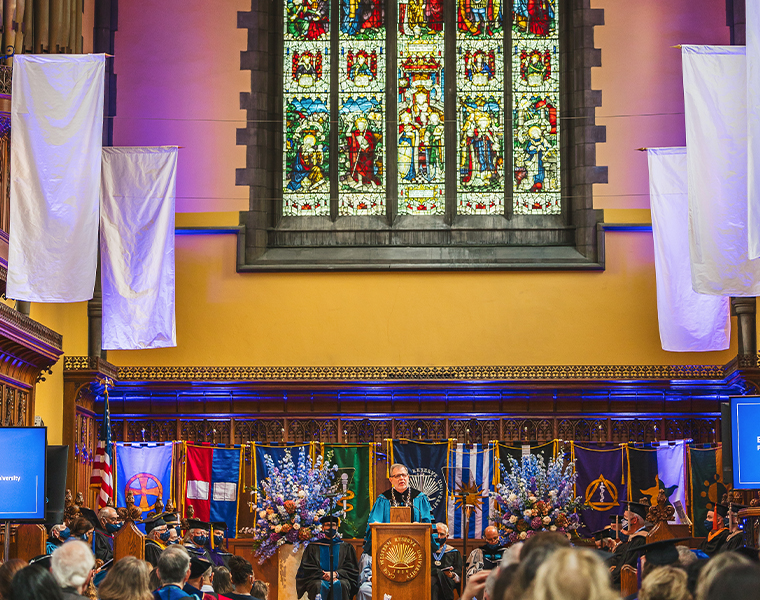 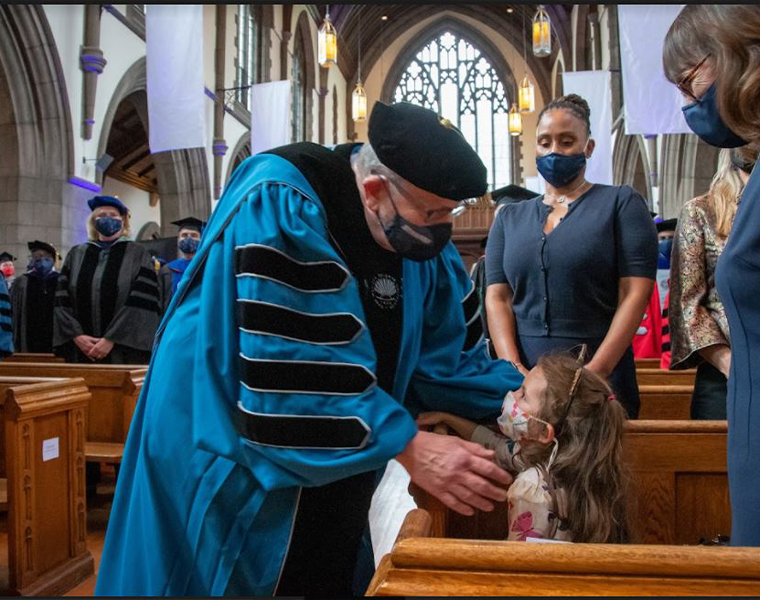 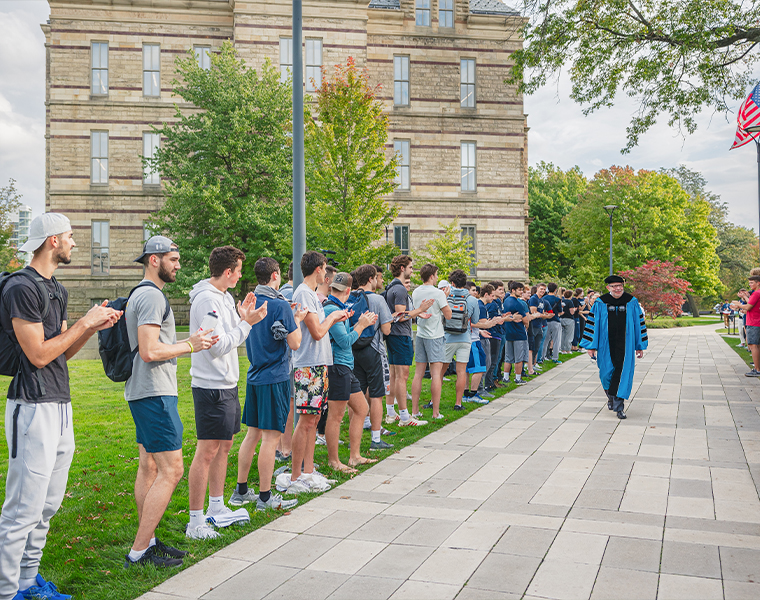 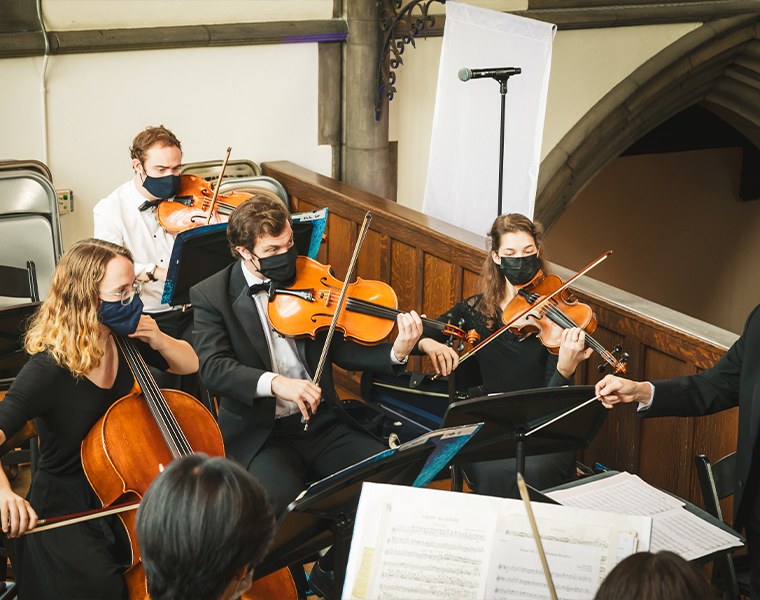 “When we put people first and when we create opportunities that have the power to transform,” President Kaler said in his address, “then we achieve excellence.”

With dozens of students and others clapping them on, faculty and administrators processed along the Binary Walkway while the Spartan Marching Band played a range of upbeat songs. A student a cappella group, Dhamakapella, sang the national anthem, while the Case/University Circle Symphony Orchestra played multiple times throughout the ceremony.

With roughly 350 people watching the livestream of the event online and a slightly smaller group in person at Amasa Stone Chapel, university leaders spoke of Kaler’s exceptional academic and administrative accomplishments—as well as their optimism about his tenure.

Board of Trustees Chair Fred DiSanto, who led the presidential search committee, told the audience of the board’s “confident expectation that [President Kaler will] bring us to the full realization of a vision of a university of even greater service to its students, its community, city and nation.”

And former interim president and current trustee Scott Cowen—who spoke regularly with Kaler in the months prior to his first day as president July 1—praised Kaler’s academic and administrative accomplishments, and noted he also possesses a “sense of calm, clarity, and a no-nonsense desire to see us continually excel.”

Student members of campus religious organizations provided pre-recorded prayers and greetings before Imam Ramez Islambouli, a lecturer of Arabic and member of the Department of Religious Studies, provided the Invocation. And music education graduate student Shelby Namsick sang the university’s alma mater with the orchestra’s accompaniment.

In an address that highlighted the 1854 Commencement Address Frederick Douglass gave at Western Reserve College—as well as the Ford family home near the corner of Adelbert Road and Euclid Avenue that served as stop on the Underground Railroad—Kaler emphasized the importance of “cultivating a community that is diverse, welcoming and inclusive.”

President Kaler illustrated the power of such community at Case Western Reserve in speaking about student Alex Berrum-Navarrete. The first in his family to attend college, he is the youngest of five children whom his mother raised alone. The community he found in a new campus organization for first-generation students, First CWRU, made an enormous difference in his first year on campus—so much so that he later served as its president. Berrum-Navarret went on to serve in multiple other roles on campus, among them emergency medical technician, resident assistant and literacy tutor, while also making the Dean’s Honors List.

Now in his fourth year on campus, he is majoring in psychology while also pursuing a master’s degree in bioethics and medical humanities. After graduation, he hopes to attend medical school.

“Alex’s story speaks to a question I believe every college and university should ask themselves,” President Kaler said after recognizing Alex in the audience. “What is our ability to transform a student? No, it’s not a metric that’s as easy to measure as graduation rates or retention rates. But it actually matters more.”

President Kaler closed his address with a favorite African proverb—and a promise.