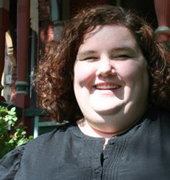 Jenni Bartholomew, a doctoral candidate at the Jack, Joseph and Morton Mandel School of Applied Social Sciences and the study’s lead author

A newly released study in Law Enforcement Executive Review reports that citizens and police officers from the Cuyahoga Metropolitan Housing Authority in Cleveland praise the role of police as first social responders.

The study was based on a random mail survey of 60 residents who received social-service referrals directly from police officers responding to calls for help for issues ranging from shootings to unruly children.

The Police Assisted Referral Program (PAR) began in late 2009 as a collaboration of the Cuyahoga County Metropolitan Housing Authority Police Department, the Partnership for a Safer Cleveland, FrontLine and the Begun Center for Violence Prevention, Research and Education at the Jack, Joseph and Morton Mandel School of Applied Social Sciences.

PAR is based on three principles:

With PAR training, police act as a conduit between troubled families and social service assistance. As part of the reporting process, the police call a 24-hour hotline requesting that the designated social service partner follow up with individuals or families. The agency responds by phone or letter usually within 72 hours. Police also leave residents referral cards with their names and phone numbers for any follow-up questions or concerns.

Results from the survey include:

Importantly, only 3 percent of residents reported that their opinion of police was worse as a result of the referral, with 97 percent indicating that their opinion was either the same or better (54 percent and 43 percent, respectively).

“We were pleased with how successfully the program built a positive relationship between residents and police,” said Jenni Bartholomew, a doctoral candidate at the Jack, Joseph and Morton Mandel School of Applied Social Sciences and the study’s lead author. “It’s very rare to see this high percentage of citizens reporting such positive views of their interactions with police.”

The interactions were also positive from the perspective of police officers. Comments from police focus groups after PAR implementation include:

“It’s a big peace of mind for us…to know that finally something was done about it, so you don’t sit there and wonder about it all the time,” and, “As long as I’ve worked here (18 years), this is the first time… actually talking to another person and helping them out with a problem they have.”

“PAR is about effective collaboration and connecting families to the appropriate service,” said Chief Andres Gonzalez of the Cuyahoga County Metropolitan Housing Authority Police Department and a co-author of the study. “Our officers have fully embraced PAR, it is now an integral part of how we provide policing services.”

The study provides preliminary evidence of the feasibility and value of police officers as first social responders and provides an example of how police and citizens can work together for their mutual benefit.

The Robert Wood Johnson Local Funding Partnership and the Cleveland, Saint Luke’s and Sisters of Charity Foundations funded the program and study.