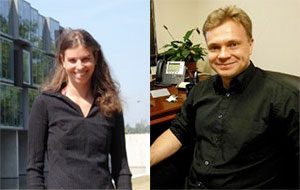 Assistant professors of physics Claudia de Rham and Andrew J. Tolley received awards to delve deep into black holes, dark energy and other phenomena tied to crucial events in the evolution of the universe.

Tolley is one of a handful of physicists nationwide who won a $750,000 U.S. Department of Energy Office of Science Early Career Research Program grant to fund his efforts.

De Rham has been named an inaugural Emmy Noether Fellow at the Perimeter Institute of Theoretical Physics in Waterloo, Canada, which will enable her to focus on research with other experts for half a year.

The opportunities will enable the researchers to explore, test and build on the groundbreaking theories they’ve helped develop to explain the increasing rate of expansion of the universe today and the rapid expansion of the early universe immediately after the Big Bang.

“The expansion in the early universe—called inflation—is, to date, the best explanation for how the early universe formed,” Tolley said. But for a very brief period, the heat and energy involved were so high that known physics fails to describe it.

“The universe is accelerating today, and while we can create models to describe it, no model naturally predicts what we’re seeing now,” de Rham said.

The theoretical cosmologists and Gregory Gabadadze, professor of physics at New York University, however, took a large step in creating such a model when they solved mathematical shortcomings of a theory called massive gravity—a problem that had confounded others for more than four decades. Massive gravity is a straightforward modification of Einstein’s theory of general relativity. While Einstein’s theory remains a foundation of science, it fails to fit recent observations that the expansion of the universe is accelerating.

In Einstein’s theory, gravitons, hypothetical particles that mediate the force of gravity, have no mass. The three theorists added a small mass “that wouldn’t be large enough to change the physics in a room or even a solar system, but would make a difference on cosmological scales—extremely large distances,” Tolley explained.

This modification has ignited research in the field and is proving to make massive gravity a viable alternative to relativity.

De Rham and Tolley also are drivers behind a new theory that seeks to provide the mechanisms that caused inflation of the universe during its earliest moments. Their theory, called the Galileon inflation model, can be tested against observations from the cosmic microwave background, large-scale structure and more.

Discoveries made by the physics, astrophysics and cosmology communities during the past year make further investigation into their theories all the more important.

Experimentalists using the Large Hadron Collider have identified a strong candidate for the Higgs boson, a theoretical particle that imparts mass to other particles, and the Planck satellite has provided an unprecedented look back to the beginning of the universe through the cosmic microwave background. These and more offer avenues to test and expand the theories.

Tolley will specifically investigate the fundamental physics of cosmic acceleration in both the late and early universe. That includes efforts to determine if massive gravity models are viable alternatives to the standard cosmological paradigm, understand the nature of black hole thermodynamics and holography in the models, develop a consistent picture and numerical procedure for quantum corrections and more.

De Rham also will focus on the expansion of the universe and whether that requires modification of gravity. One aspect she’ll concentrate on is the inability to mathematically reconcile standard and alternative theories with the expanding universe and fundamental forces. This has led some researchers to question whether particle physics and the physics of gravity can be tied together.

“I want to establish an interface between gravity and particle physics,” de Rham said. She will be working with the cosmology and particle physics groups on faculty as well as visiting experts at the Perimeter Institute. “I am looking forward to exploring new ideas and directions.”

Tolley’s grant will allow him to hire a postdoctoral researcher and fund two graduate students to assist with his research over the next five years.

De Rham’s fellowship will enable her to take up to two graduate students with her and other postdocs and collaborators for some discussions from January to June 2014.