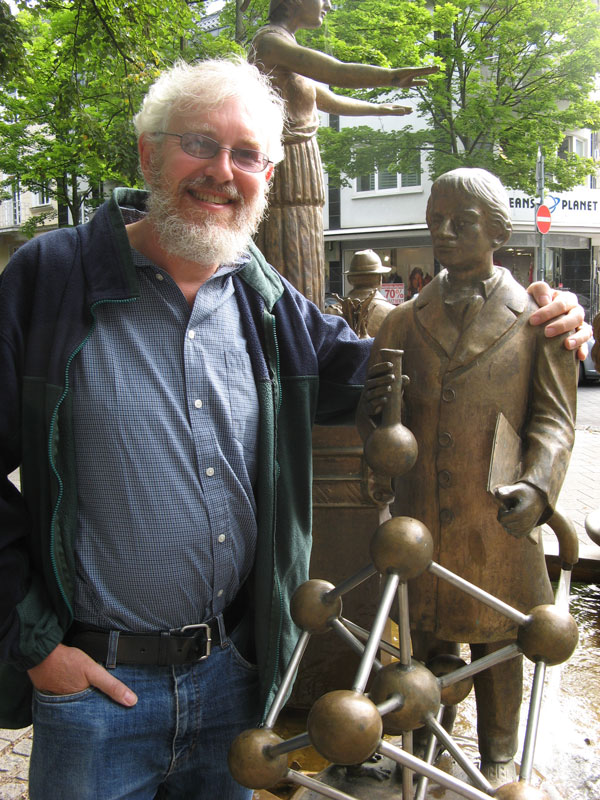 Lambrecht, who recently arrived in Germany, visited a statue in the center of Jülich, which features a scientist, a crystal structure of iron and the “atomium.”

Perfection may drive many people in their work, but physics professor Walter Lambrecht actually seeks out imperfection.

As the recipient of a 2012 Fulbright award, Lambrecht will research imperfections in crystals, better known in the physics world as “point defects,” this fall in Jülich, Germany.

In a crystal, atoms are arranged in a regular array—but, in reality, no crystal is perfect, Lambrecht said. Some atoms are out of place, and even the smallest impurity, or point defect, can determine the properties of the crystal, such as its color and electrical conduction.

For more than seven years, Lambrecht has studied these point defects and how they influence the properties of the crystal. In fact, he earned a grant from the National Science Foundation last year to conduct research on them; through his Fulbright award, he’ll conduct similar, continued studies.

“Sometimes point defects are introduced on purpose to endow the materials with specific desirable properties, such as magnetism or electrical conductivity; sometimes they need to be avoided,” Lambrecht explained. “So they are extremely important, but our capability of identifying point defects by experiment is still limited and requires help from simulations.”

Lambrecht’s research, therefore, aims to improve simulations and better correlate them with experiments, which would ultimately help identify the signature of each type of defect.

While most current research on point defects simulates a mathematically convenient “periodic array of defects,” Lambrecht’s approach will focus on a single imperfection embedded in an otherwise perfect crystal. This tactic will help avoid unwanted interactions between the defects in the simulation.

Though researchers in the 1980s developed similar methods, no one ever revised or improved the methods because they deemed the task too cumbersome, Lambrecht said. However, “with today’s more powerful computing power, I felt it is time to revisit this approach,” he said.

So through his research, Lambrecht hopes to “predict the properties of point defects using quantum mechanical calculations with better accuracy than is currently possible,” he said. He also hopes to address how to deal with the electron-electron interaction for electrons trapped near the defect.

His Fulbright studies will take place at  Jülich’s Peter Grünberg Institute, a state-of-the-art facility for developing technologies, devices and nanoelectric material systems. He plans to collaborate with researchers at PGI who have developed similar methodologies to his. He began working with this group of researchers two summers ago, when he hosted a visiting doctoral student from PGI; their results from this work were recently submitted for publication.

Lambrecht will be on sabbatical from the university this fall. He will conduct his Fulbright research July through December before coming back to Case Western Reserve University to conduct research and mentor students in the spring.