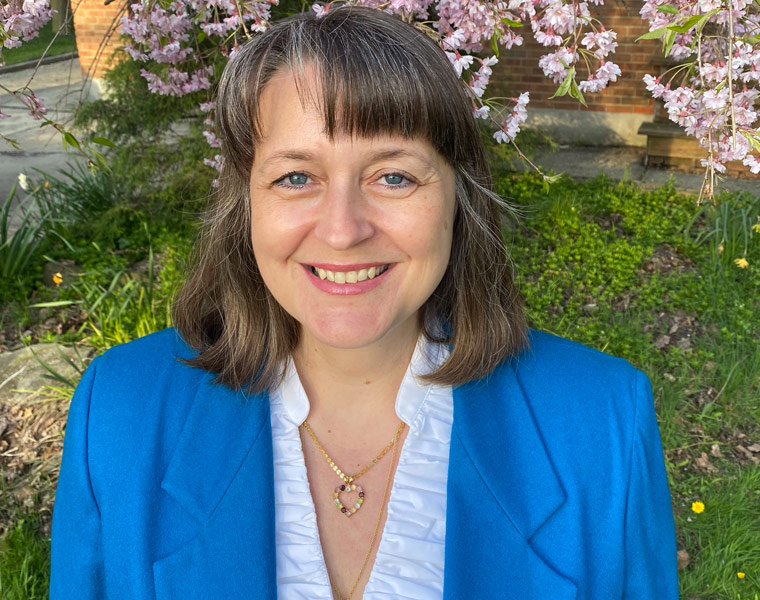 Diana Driscoll likes to ask her students, “Why do we care?” The inspiration for that challenge came from a former student who ended each class by asking her that same question.

“He was not being disrespectful,” she said. “He really wanted to understand the connection between physics and real life.”

Driscoll likes to make sure that her students never leave her classroom or extra-help sessions without getting the answers they came to solve. She’s willing to stay as long as it takes, even if it means changing her plans for the day. It’s that intense personal connection that sparks admiration from her students.

“Nothing seemed to matter to her more than students understanding and finding a love for the subject she obviously cherishes,” said one of her nominators.

Driscoll, instructor and introductory lab director for the Department of Physics, is a recipient of the 2020 Carl F. Wittke Award for Excellence in Undergraduate Teaching.

She will receive the award during commencement ceremonies on Sunday, May 17.

Driscoll’s early life experiences shaped her career path and dedicated approach to teaching. As a high school student in communist Romania, Driscoll looked up to her physics teacher, who insisted that his students never give up on problems and always do their best work.

Before her senior year in high school, Driscoll fled with her parents to Germany, where the family lived in a refugee camp for two years. During that time, she learned her physics teacher had passed away. Today, she credits his influence with her desire to carry on his legacy and teach.

Like her mentor, Driscoll takes pride in helping students solve difficult problems. She feels one of the most fulfilling aspects of her job is connecting with students, mostly non-majors, who are new to physics.

According to one of her student nominators, Driscoll pushes herself to see problems from the student perspective. For a summer Medical College Admission Test (MCAT) prep course, Driscoll learned organic chemistry right alongside them. When students asked why, she said: “I have a lot of students who take organic chem here and struggle with it. If I can go through this material, even if it takes me a year to do, then I can be a resource to students in the future.”

“Diana is a top-notch instructor, consistently getting rave reviews from her students,” said Corbin Covault, co-chair in the Department of Physics. “At the same time, she is the director for all of our introductory laboratories in physics where she works at the intersection of faculty, graduate students and hundreds of undergraduate students every semester.”

“Diana’s creative and effective efforts to transition her course and the labs to remote learning this past semester were amazing—she really rose to the challenge,” said Covault. “We cannot overstate Diana’s positive impact both on her students and on the department as a whole. She is completely deserving of this award.”

Created in 1964, the Wittke Award is named for Carl Frederick Wittke, who, from 1948 to 1963, was professor of history, chair of the Department of History and vice president of Western Reserve University. Faculty members who teach undergraduates are eligible. Undergraduates nominate candidates; a committee of students interviews nominated faculty members and recommends winners. Two faculty members receive the award each year.