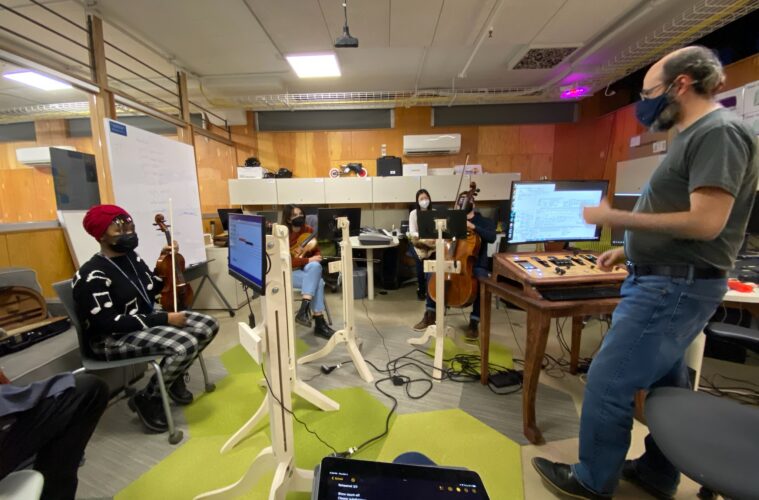 Physics, math and music collide in ‘Crystals of Sound’

Physics, mathematics and music will collide in real time in an unusual joint concert Sunday afternoon at the Cleveland Institute of Music (CIM).

“Crystals of Sound” is the result of a novel research and musical composition project conducted over the last year by Jesse Berezovsky, an associate professor of physics at Case Western Reserve University and Alex Cooke, a CIM faculty member, composer and theorist.

The performance of nine pieces from the two collaborators and student performers is at 4 p.m. at CIM’s Mixon Hall (11021 East Blvd., Cleveland). The concert is free and open to the public, but attendees must make a reservation on the CIM website, where the program will also be livestreamed.

But while Berezovsky—also classically trained viola player—and Cooke collaborated to bring the concert together, the program lists them not as composers, but as conducting algorithms that the computer uses to compose the music that will be played.

Each of the nine original pieces will be played live on stage—sometimes even as they are being “composed” by a computer program—by student musicians from Case Western Reserve and CIM.

In some cases, a string quartet responding in real time to a score being manipulated by Berezovsky as his computer generates the melody, harmony and rhythm.

“Nearly every piece on Sunday will have something brand new in it,” Berezovsky said. “In some cases, that will mean a computer ‘playing’ something new, but in others it will mean the computer feeding a new score to musicians who will play it live, in real time.”

Berezovsky will sit at a computer and software system he calls “The Composer,” housed in a wooden cabinet he and several students built at the Larry Sears and Sally Zlotnick Sears think[box], Case Western Reserve’s innovative 50,000-square foot, seven-story makerspace.

The student musicians will sit in front of music stands they call “Smart Stands,” also built at think[box]. The stands show the computer-generated score being altered by Berezovsky so the students can play along.

In the final piece, “Free Energy,” members of the audience will be invited on stage to manipulate the various aspects of the composition using the Smart Stands. The stands also have smaller versions of The Composer, featuring knobs and dials that can tell the computer to change the beat, harmony or rhythm of the piece of music as it is being composed.

“It’s actually somewhat terrifying because no one knows what you’re going to end up with,” Berezovsky said. “In some cases, the chord progression is something that might sound familiar, almost boring, but other times, it’s borderline chaotic. It should be a lot of fun.”

Berezovsky and Cooke met about a year ago. A student working alongside Berezovsky and also taking courses at CIM suggested the two meet and compare notes on their shared interest in the science behind sound.

They did, and their common interest in music, math and physics led them to begin thinking about whether they could actually write algorithms to create music.

“It’s no secret that there are deep connections between music and science, but what we’re seeing now are parallels in their fundamental construction, which is something rather remarkable,” said Cooke, who has studied the statistics of musical patterns in Western music and developed his own algorithms for generating harmonies.  “What we’re doing isn’t meant to replace the human composer or performer; rather, it is meant to highlight that every time we write a bar of music or play a piece, we are tapping into something quite profound, and there is a lot left to be explored there.”

Cooke also holds a Master of Science in Applied Mathematics from Case Western Reserve, where his thesis was Algorithmic Stochastic Music, combining mathematics and music into a system of composition and theoretical analysis.

“Projects like this one are the precise reason that the Expanding Horizons Initiative was created,” Ward said. “Watching the departments across the College and other Cleveland institutions bridge their expertise to create new innovations is incredible, and this collaboration of music and physics is a brilliant representation of that.”

Phase transitions behind the music

Sunday’s concert is an extension of Berezovsky’s ongoing research into how the ordered structure of music emerges from the general chaos of sound.

The answer in physics—and music, Berezovsky argues—is called “phase transitions” (think of water boiling into vapor at it’s boiling point, or turning into solid ice at its freezing point) and comes about because of a balance between order and disorder, or entropy.

“We can look at a balance—or a competition—between dissonance and entropy of sound—and see that phase transitions can also occur from disordered sound to the ordered structures of music,” he said.

The theory also speaks to why we enjoy music—because it is caught in the tension between being too dissonant and too complex.

That research was published in 2019 in the journal Science Advances, but said he and Cooke are working on a paper explaining their project.