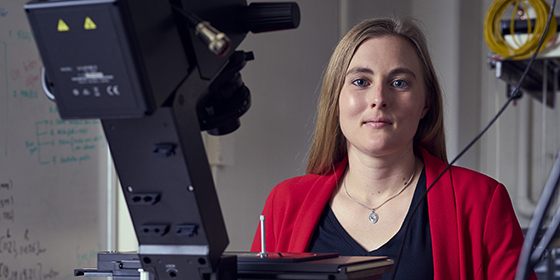 Lydia Kisley focuses on single-molecule microscopy, method to observe how molecules behave on metal surface as it corrodes

(This story is one of several about 2022 winners of the NSF CAREER award at Case Western Reserve University.)

The grant will support Kisley’s lab in an ongoing investigation into the chemical underpinnings of how metal corrodes at the molecular level. The research could have future applications in battery and solar energy technologies, energy-efficient catalytic reactions and the corrosion of infrastructure.

The CAREER award is considered the agency’s most prestigious grant to junior faculty members “who have the potential to serve as academic role models in research and education and to lead advances in the mission of their department or organization.”

Kisley, the Warren E. Rupp Assistant Professor of Physics, also recently won a five-year, $1.9 million grant from the National Institutes of Health to use the single molecule microscopy to investigate how proteins behave in the “extracellular matrix,” the less-studied area outside the cell. In 2017, she was named to the Forbes 30-Under-30 for noted researchers younger than 30 years old.

Joy Ward, dean of the College of Arts and Sciences, called Kisley a “remarkable researcher, educator and leader.

“Lydia’s early-career successes are outstanding and have already made a significant impact on material design,” Ward said. “I look forward to watching her career continue to flourish in the years to come. It is an honor to have her in the College.”

The NSF grant is a five-year, $625,000 award. Kisley said the NSF award is also a recognition of the work being done by the PhD students and others in her lab.

Kisley’s lab researches a range of areas—much of it using a method known as single-molecule microscopy, or fluorescent microscopy (FM). She said it is a technique more often associated with biologists or biophysicists studying living cells and she has applied equally to areas like corrosion of metals.

FM involves attaching a fluorescent chemical compound known as a fluorophore to a single molecule and tracking and recording it over time. The results can inform the researcher about how one or many molecules may behave under certain conditions.

Kisley’s lab has deployed this technology to investigate the area outside the cell (known as the extracellular matrix), especially in relation to conditions like Muscular Dystrophy; observing the behavior of pharmaceutical molecules when they are being purified; and tracking how molecules behave in real time as steel or other metals corrode.

The NSF CAREER grant will fund her ongoing research in that last area as well as an educational outreach plan.

“What we’re trying to do is visualize the chemical reactions at metal surfaces virtually in real time,” Kisley said. “We know that when metal corrodes that metal ions are dissolving at the iron surface, for example. But that’s never actually been seen in real time at the molecular level. We can do that.”

Kisley said she expects to expand the work from iron to steel and steel alloys over the course of the grant.

“In the long term, we believe that it could make an impact for engineers,” she said. “We hope to be making the connection between fundamental science and what industry cares about.”

Kisley is also planning a series of educational events at the Cleveland Cultural Gardens to help connect the community to historic stories of scientists from various cultures to garner interest and understanding in science, technology, engineering and mathematics.

“The Gardens are a hidden gem in Cleveland, and it turns out that some of the monuments there are to people who were also scientists from several different cultural groups,” she said. “We want to use that as a launching point for creating excitement for the sciences.”

This article was originally posted March 11.