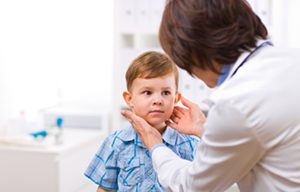 Recently, a study of more than 16,000 patient visits published online in the journal Pediatrics proved Cuttler’s thesis correct. The lead investigator on the research project, Cuttler succumbed to cancer late last year. But her colleagues are committed to seeing its lessons disseminated across the country.

“It was an honor to work on this project with Dr. Cuttler,” said study first author Sharon B. Meropol, assistant professor in the Departments of Pediatrics and Epidemiology and Biostatistics at the School of Medicine, and pediatrician at University Hospitals Rainbow Babies & Children’s Hospital (UH Rainbow). “This project is one important example of her remarkable legacy as a researcher and child health advocate.”

Cuttler, professor of pediatrics and bioethics at the School of Medicine and the William T. Dahms Chair in Pediatric Endocrinology, Diabetes and Metabolism at UH Rainbow, knew all too well children receive, on average, just half the recommended health care they need. Disadvantaged children, often the most at risk for a range of ailments, tend to receive even less. She believed a trained practice facilitator—or coach—could help to make a major, measurable difference in children’s treatment.

To test the theory, Cuttler, Meropol and their colleagues engaged with pediatric and family practices across Greater Cleveland, including more than a dozen within the University Hospitals health system. Ultimately 30 entities participated in the project, a randomized clinical trial that assessed the impact of “practice-tailored facilitation” on providers’ ability to meet quality care standards in three critical areas: obesity detection and counseling, lead exposure screening, and fluoride varnish application to prevent tooth decay. The facilitator, or coach, doesn’t tell the provider what to do, but rather collaborates with the entire practice to help its members devise their own solutions.

“Practice-tailored facilitation is gaining traction as a viable practice enhancement for improving child health care delivery,” Meropol said. “A practice facilitator, or practice ‘coach’, collaborates with practices to develop and implement their own changes from within.”

The study intentionally delayed intervention for 14 of the practices by four months. Those medical groups served as the “control” sample so researchers could assess more accurately just how much of an impact the coach’s presence could make.

The practices that received interventions from the outset of the study, for example, improved their ability to meet obesity screening and counseling standards by a factor more than six times greater than those in the control group. And the application of fluoride varnish? More than 20 times greater. The margin for lead screening treatment was closer, but the early intervention group still excelled over those practices that had not yet received the benefit of a coach.

“We had to make the comparison between the active intervention and the non-intervention groups for those first four months,” Meropol said. “We needed to show it was the intervention itself that was making the difference rather than something else going on at the same time. Still, we deliberately structured the study so that all practices would receive the benefits of the intervention no later than four months into the trial.”

Once practices in the control group actually got to work with the trained coaches, their data improved dramatically as well. After receiving an equivalent amount of practice-tailored facilitation, the delayed-intervention practices reached quality standards at a rate of 87.1 percent in obesity screening, 90.1 percent in lead screening and 89.9 percent in fluoride varnish. Both early and later intervention practices maintained high success rates in all three areas of pediatric prevention care delivery when evaluated two months after the end of the full six-month intervention.

“The physician practices participating in the trial were highly motivated and really poised to improve,” Meropol said. “The facilitator just acted as the catalyst for improvement.”

To initiate the process, the practice facilitator shared baseline data with each practice. The facilitator then offered resources and led brainstorming sessions with practice members. Through the process of discussion and debate, the group developed its own solutions. As a result, each practice had its own uniquely tailored improvement plan.

“Follow-up was key to our success. Each week, the facilitator visited the practice and either met formally or huddled with them to review successes and decide what changes to implement the coming week,” Meropol said. “It’s what is known in quality improvement science as ‘plan-do-study-act’ cycles. You make a plan, carry it out, evaluate it, change the plan as needed and then repeat the cycle.”

The study can be found online.

Key players in carrying out this trial were the Departments of Pediatrics, Epidemiology and Biostatistics; Family Medicine and Community Health; Oncology; Sociology; Pediatric Dentistry and Bioethics at School of Medicine; and the Center for Child Health and Policy at UH Rainbow.

This work was supported by a grant from the Medicaid Technical Assistance and Policy Program from the Ohio Department of Jobs and Family Services to Dr. Cuttler and by the Center Child Health and Policy at UH Rainbow. A portion of one author’s time was additionally supported by a clinical research professorship from the American Cancer Society. Publication of the paper was also made possible by the Clinical and Translational Science Collaborative of Cleveland, UL1TR000439 from the National Center for Advancing Translational Sciences component of the National Institutes of Health (NIH), and NIH Roadmap for Medical Research.