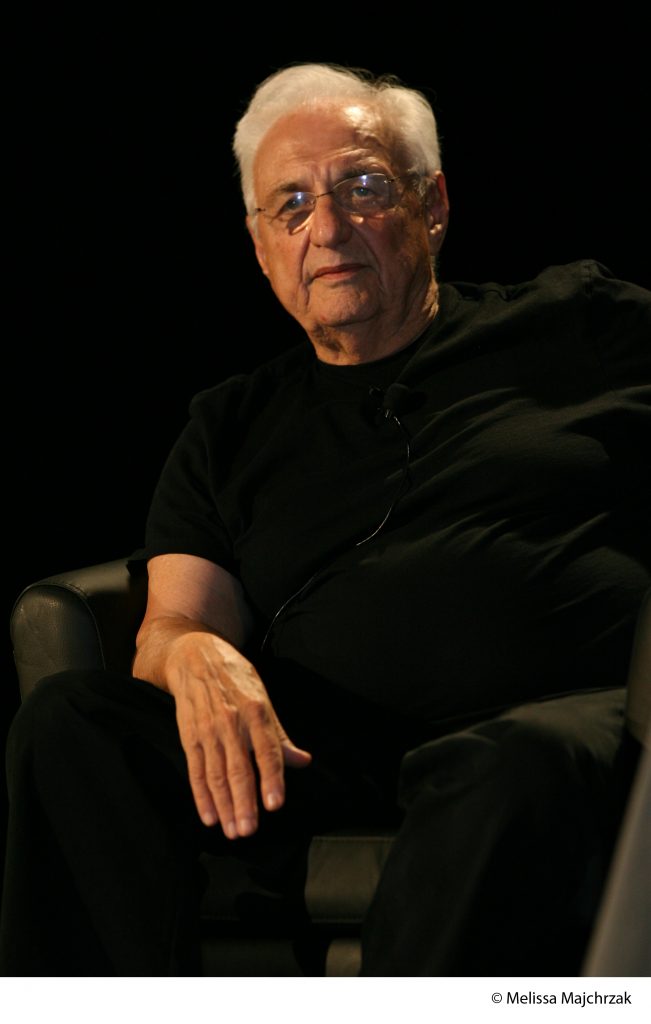 A decade after the Peter B. Lewis Building opened at Case Western Reserve, internationally renowned architect Frank O. Gehry will receive an honorary degree at the university’s 2013 commencement ceremony May 19.

“It is fitting that, on the 10th anniversary of the opening of a structure that was a catalyst for our campus, we welcome back the two men most responsible for its creation,” President Barbara R. Snyder said. “Both men redefined their respective fields, and their vision for a single building reminded us of the extraordinary influence that two talented people can have on a university and, ultimately, the globe.”

Gehry’s engagement on the Weatherhead School of Management’s Peter B. Lewis Building emerged from a friendship between the two men that began soon after they first met in 1985 at a lecture at the Cleveland Center for Contemporary Art.  Lewis, the longtime CEO of Progressive Insurance, first involved the architect designing a new home in Northeast Ohio. Gehry also developed grand plans for a downtown skyscraper for Progressive, but neither project reached fruition. Dedicated in the fall of 2002, the five-story, 150,000-square-foot building is today credited with spurring the school’s new emphasis on design in management. After the Peter B. Lewis Building at Case Western Reserve University, Gehry went on to design the Peter B. Lewis Science Center at Princeton University.

Gehry, dubbed the “most important architect of our age” after the 2010 World Architecture Survey, is known for designs that offer a soaring, sweeping sense of energy and flow—often using metals like steel and titanium to create the striking curves and lines that so often awe and inspire.

Gehry’s Guggenheim Museum Bilbao was the most frequently cited when the renowned architects and critics in the 2010 survey answered which works they considered most important since 1980. Soon after the museum opened in 1997, legendary architect Philip Johnson visited the structure and called it “the greatest building of our time,” and Gehry “the greatest architect we have today.” Paul Goldberger, New York Times critic, termed the museum “a signal moment in the architectural culture.”

Among Gehry’s other landmark works are the Experience Music Project in Seattle, the Walt Disney Concert Hall in Los Angeles, and 8 Spruce Street in New York City. To achieve some of his most ingenious designs, Gehry ultimately engaged the capacity of technology to redefine the limits of what could be considered buildable. His creativity and contributions earned him the Pritzker Prize in Architecture, the National Medal of Arts, and the Cooper–Hewitt National Design Award for Lifetime Achievement.

The university will announce its other honorary degree recipients tomorrow in The Daily.