Brain scientists face a dilemma: Conventional wire implants are rigid and can sometimes traumatize that sensitive, vital organ; but softer materials now being tested by researchers, have their own problems—they often bend or buckle and can’t be easily forced into squishy tissue inside the skull.

A biomedical research team at Case Western Reserve University might have found an answer to that problem—inspired by the bothersome, buzzing, blood-sucking mosquito.

“Until now, researchers were mostly inserting stiff, metallic devices into the Jello-like material of the brain, and that can be a real problem,” said Jeffrey Capadona, an associate professor of biomedical engineering at the Case School of Engineering. “But we think we’ve found a solution—and we can thank mosquitos for that.”

And a host of neural researchers could benefit. Brain microelectrodes have a significant potential to treat people with neurological dysfunction and improve our understanding of neural circuitry.

Capadona, who heads a Bio-inspired Materials for Neural Interfacing lab, said post-doctoral researcher Andrew Shoffstall came up with the idea for solving the dilemma. Shoffstall was first author on a paper explaining the technique that was published earlier this year in the journal Scientific Reports. 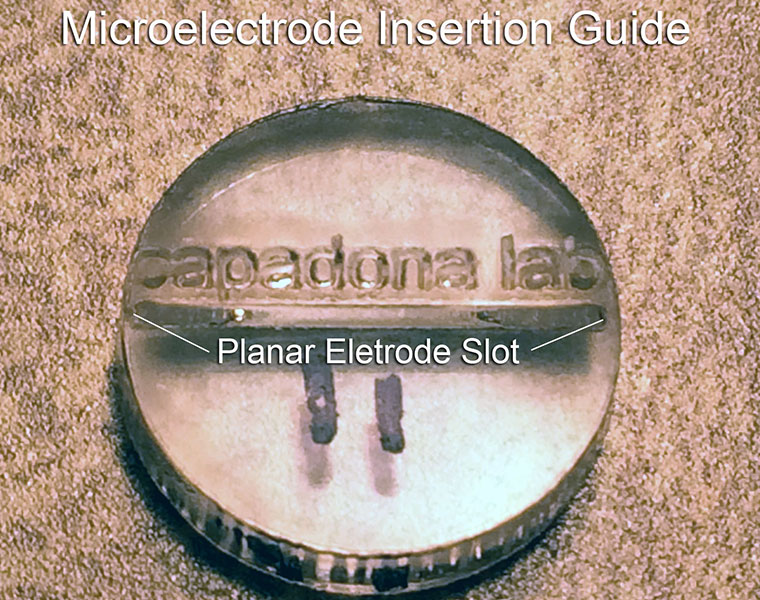 Shoffstall said a series of circumstances—a handful of pregnant co-workers concerned with how mosquitoes spread the Zika virus—led him to a National Public Radio report showing how mosquitoes bite their human or other mammalian hosts.

“There was a diagram showing this wild mechanism they have with micro saws that cut open the skin, but then two other arms that pry open the skin so the ‘straw’ can go straight in, with the help of a guide arm,” he said. “And I thought, ‘Why can’t we do this with neural implants?’”

So they did. Researchers designed a prototype implant-guiding tool now being tested in the Capadona lab. They 3-D-printed the device, a small plastic disc with only a few noticeable small holes, at the Larry Sears and Sally Zlotnick Sears think[box], Case Western Reserve’s center for innovation and entrepreneurship.

Shoffstall, Capadona and their team only borrowed the one process—the “guide arm” alongside the probe itself, but not the sawing or spreading of tissue—and incorporated it into the small, gray plastic tool. 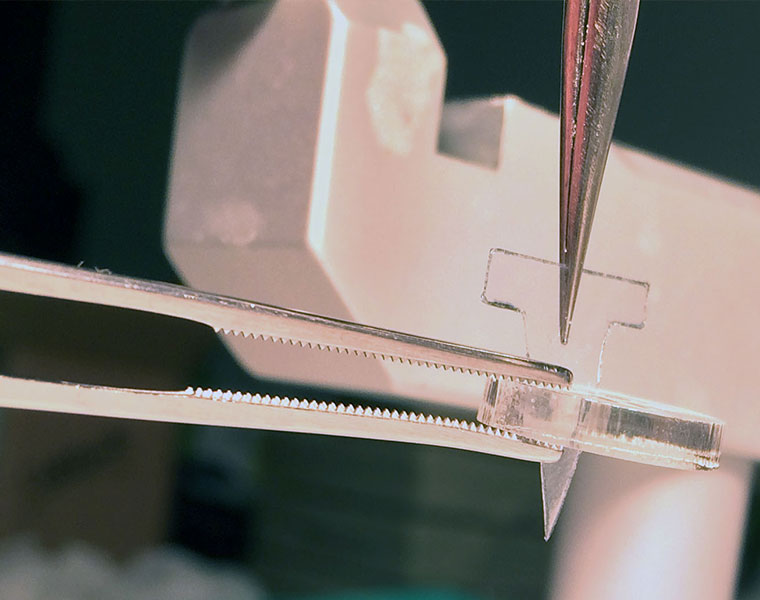 Side view of the neural implant guide inspired by mosquitoes.

Technically, Capadona said, that makes their product “bio-inspired,” not “biomimetic,” or actually copying the insect’s precise function. (See illustration comparing the two by Erika Woodrum of the Cleveland FES Center.)

Still, what might look drab and unimpressive—even “low-tech,” Shoffstall said—is already helping researchers at Case Western Reserve insert the flexible probes safely and successfully into the brains they are studying.

Other authors on the most recent research and journal article introducing the method included Strongsville (Ohio) High School student Suraj Srinivasan, who Capadona said was especially helpful at building the devices at Sears think[box]. Srinivasan started volunteering at the Capadona lab in the summer of 2017.

Capadona and Schoffstall also said the buzzing pest may have more to show them.

“What we did in this paper was really a proof of concept, but we’ll continue to use this insect for inspiration,” Capadona said. “Who knows what could come next?”

This article was originally published April 5, 2018.