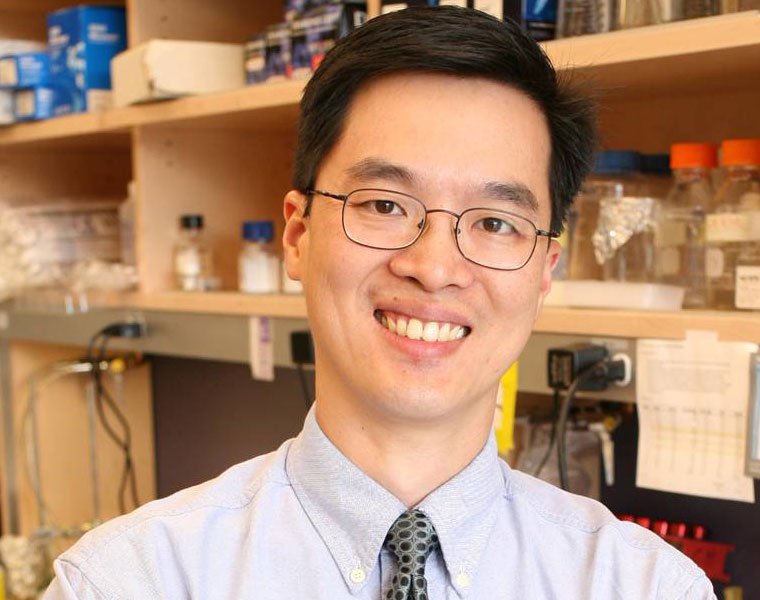 Alex Huang’s battle to defeat childhood cancers got another boost last week when the St. Baldrick’s Foundation named him among the year’s leading researchers in the field.

The volunteer-driven organization, which focuses solely on pediatric and adolescent cancers, awarded 90 grants to scientists at such institutions as the Dana-Farber Cancer Institute, Duke University, Johns Hopkins University and St. Jude Children’s Research Hospital. Huang’s Innovation Award—one of two among the 90—will support work to increase the effectiveness of immnunotherapy efforts, with a special focus on brain tumors and solid tumors.

“There is an urgent need for more effective pediatric cancer treatments,” said Huang, a professor of pediatrics. “My goal is to continue fighting to find a cure for these children each day.”

This recognition represents the third time St. Baldrick’s has invested in Huang’s research. In 2008, he received a St. Baldrick’s Scholar award, which the foundation extended for two years in 2011. Those funds supported Huang’s efforts to find better ways to integrate immunotherapy approaches in treatments of pediatric cancers primarily affecting bones and skeletal muscles. Two years later, he received a St. Baldrick’s Infrastructure Grant to help establish a pediatric solid-tumor banking system. Solid tumors are abnormal groups of cells that do not include liquid or cysts. Such banks store cancerous tissues for researchers to use in examination and testing.

The latest award will help Huang build on results of a groundbreaking study that he and a nearly a dozen other Case Western Reserve colleagues published last year in the prestigious journal Science. The research found that a particular protein enzyme found in brain cancers appeared to stunt the ability of immune cells to conquer the tumor. Using mouse models, the team found that when the amount of this enzyme was low, the immune cells had much greater success in removing the brain cancer. Huang and a member of his lab, Assistant Professor Agne Petrosiute, were co-senior authors of the piece; Petrosiute is currently a St. Baldrick’s Scholar.

The foundation is the nation’s largest private funder of grants to support childhood cancer research. Its roots date back to 1999, when one man challenged two colleagues to think about ways to give back to society. The trio settled on a head-shaving contest held during a St. Patrick’s Day celebration at a Manhattan pub. Nearly 20 people participated, raising more than $100,000 for childhood cancer research. The head-shaving holiday, which the trio dubbed St. Baldrick’s, became an annual event, quickly spread to cities around the country, and in 2005 formally became a foundation. Since that year, St. Baldrick’s has contributed $230 million in research grant funding. Huang and between eight and a dozen members of his lab regularly “shave it off” for St. Baldrick’s Day; 2017 marked Huang’s ninth consecutive year of participation.

The federal government reports that cancer is the leading cause of death by disease past infancy among children in the U.S. Last year, Huang was named to the Working Group on Cancer Immunology and Prevention that advised the National Cancer Advisory Board establish as part of former President Obama’s “moonshot” initiative against cancer. He is a member of the Case Comprehensive Cancer Center and the Angie Fowler Adolescent and Young Adult Cancer Institute, and holds several secondary appointments in departments across the School of Medicine. He is also Theresia G. & Stuart F. Kline Family Foundation Chair in Pediatric Oncology, Associate Director, Clinical Fellowship, Division of Pediatric Hematology / Oncology at University Hospitals (UH) and a pediatric oncologist at UH’s Rainbow Babies & Children’s Hospital.