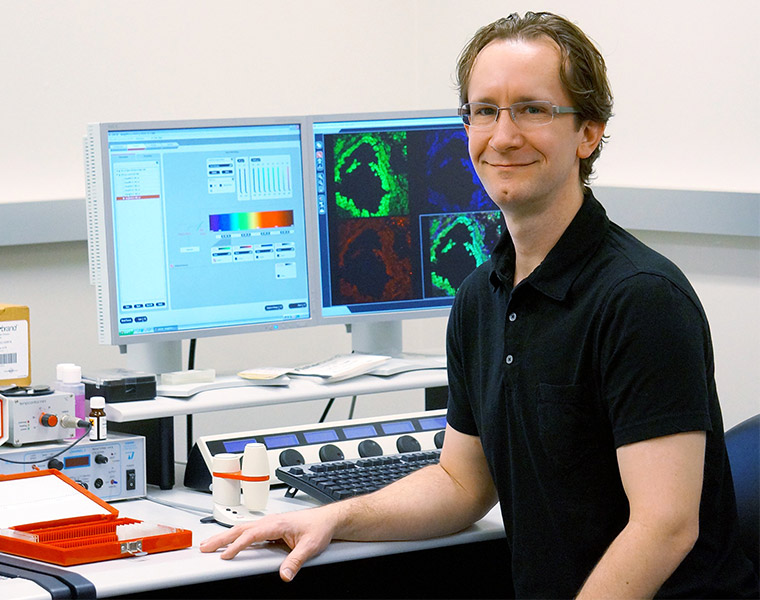 Brian Cobb recalled the transforming effects of his first mentor.

“When I was a sophomore at the University of Oklahoma (OU), I took a class in organic chemistry with Dr. Roland Lehr,” he said. “I went to his office with a question, and after answering it, he asked me my plans for a career. I said I was interested in research. He found a research program at the OU medical center and matched me with Dr. Richard Cummings, who is now at Harvard Medical School. At the time, I didn’t even know I needed that. To me, that is the epitome of an ideal mentor.”

Experiences like these—as an undergraduate and graduate student—have shaped his own commitment to mentoring.

“My brother and I were the first in our extended family to complete college, let alone graduate school, so originally I had no role models,” said Cobb, professor of pathology and director of the Immunology Training Program in the School of Medicine. “Like many students, I sometimes felt alone and overwhelmed. But my mentors saw something in me and it gave me the confidence that I needed. I realized later how, because of my mentors, I really wasn’t alone. Now, I’m trying to do the same for my own students.”

Cobb’s dedication to his students has resulted in being recognized with the 2019 John S. Diekhoff Award for distinguished graduate student mentoring. An active member of many thesis committees, Cobb was described by one of his nominating students as someone who “breathes life and inspiration into one’s fledgling career.”

A second student nominator reported that when administrative paperwork got lost in the shuffle and she was behind in getting her paycheck, Cobb accompanied her to the necessary offices to make sure the problem was resolved in a timely manner.

“I always felt that Dr. Cobb was fully invested in my scientific training and career development,” the student wrote. “I can’t imagine having another mentor to guide me through the PhD process.”

While delighted with receiving the Diekhoff Award, Cobb said: “I’ve never approached mentoring from the point of view of myself—it’s about the students, not me. There’s a parental aspect about mentoring. I feel that their future, to some extent, is in my hands.”

Among his research interests, in which his student-mentees play an active role, Cobb is a nationally recognized leader in the emerging field of glycoimmunology—the interface of glycobiology (the scientific study of carbohydrates and their role in biology) and immunology. A central aim is to understand the role of sugars (carbohydrates) in the immune system’s response to challenges when under attack by a toxin or other foreign substances, and how they do not trigger an immune response in normal situations. Findings will be helpful to better understand and address inflammation, a major factor in numerous disorders, ranging from cancer to Crohn’s disease.

Cobb will be recognized during commencement ceremonies May 19.

The Diekhoff Award honors John S. Diekhoff, a distinguished scholar, teacher, mentor and administrator who served Case Western Reserve in several capacities during his tenure from 1956 through 1970. He was professor of English, chair of the Department of English, dean of Cleveland College, acting dean of the School of Graduate Studies and vice provost of the university.