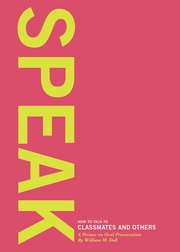 The 5-by-7-inch pocket-sized booklet was written and created by professional speechwriter William Doll, a SAGES Presidential Fellow, at the request of SAGES’ Director Peter Whiting to give students a “crash read” on how to effectively reach and engage an audience.

Oxford plans a February publication date, but the 32-page guide can be pre-ordered on the publisher’s website for $9.95.

“The publication of SPEAK by Oxford, the premier academic press, validates the approach we took to support oral presentations in SAGES and speaks to the quality of the handbook we developed,” Whiting said.

The primer, he said, was produced to offer a practical summary of key points to remember when preparing and delivering oral presentations.

More than 200 instructors from Case Western Reserve’s SAGES courses have distributed nearly 5,400 copies since the program began. Undergrads in other courses, graduate and professional students and post-docs have also used the primer, according to Whiting.

Doll relied on his journalistic editing skills as a former feature writer and theater critic for The Plain Dealer to keep the primer brief and to the point.

The book draws on Doll’s experience as a professional speechwriter for corporate presidents and others. He realized early in his career that, regardless of the topic, all speeches share basic components: a message and brevity.

Doll offers tips for what he calls “writing the talk” as well as public presentation “don’ts” such as: using overused words like synergy or low contrast lettering in PowerPoint presentations.

Whiting said SAGES instructors say they’ve seen an improvement in student presentations because of the book.

“Without SPEAK, I don’t think we could have been as successful as we’ve been in helping students hone their skills in public speaking,” he said.

SPEAK won several awards in 2009, including: The Gold Award from the Council for the Advancement and Support of Education, Excellence in Design: Books category in CASE’s 2009 “Circle of Excellence” national award competition, and the “Award of Excellence” from the University and College Designers Association.