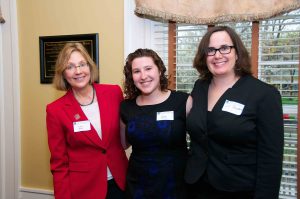 Case Western Reserve University awarded Lizzy Benway, a junior nursing major, the fourth Douglas W. Nock Endowment Scholarship. The award recognizes and provides financial assistance to outstanding undergraduate students or admitted high school graduates who have advanced the mission of the Lesbian, Gay, Bisexual, Transgender (LGBT) community at the university or as a high school student in their community.

The scholarship selection committee of the Lesbian, Gay, Bisexual, Transgender and Allies Committee, chaired by Donald Feke, vice provost for undergraduate education, noted that Benway showed tremendous leadership skills in her work revamping the Drag Ball and spearheading Spectrum’s participation in CWRU Live! activities fair, as well as the creation of the inaugural Rainbow Reception during 2014 Freshman Orientation. Benway, who previously served as secretary of Spectrum, is now president.

As Benway stated in her application, “This scholarship will benefit me by giving me confidence that what I have accomplished on campus thus far is worthwhile, while also giving me the motivation to keep making these changes and striving for the most accepting and understanding campus possible.”

The Douglas W. Nock Endowment Scholarship was awarded to Benway on April 30 at the Lavender Graduation celebration.