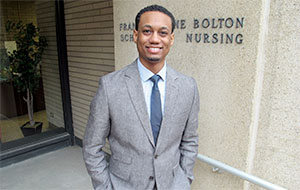 They repeatedly come to him for sound advice about their academic and career paths. Four undergraduates gave Hickman a special “thank you” for such guidance by nominating the assistant professor of nursing for the prestigious J. Bruce Jackson Award of Excellence in Undergraduate Mentoring.

The Jackson Award honors outstanding advising and mentoring of undergraduate students by a current employee or emeriti faculty member of the university. J. Bruce Jackson (ADL ’52) established the award in 2003 in honor of the late Dean Carl F. Wittke, Jackson’s mentor during his undergraduate years.

Hickman shares this year’s Jackson honors with Mohan Sankaran, a chemical engineering faculty member. They will receive recognition during commencement ceremonies on Sunday, May 19, for making a positive impact on students’ lives.

The Jackson Award surprised Hickman, who was appointed to the rank of assistant professor in 2010.

While glancing at the faculty nominations, Hickman noticed the list included some of his former professors from his undergraduate days as a biology major and, later, as a master’s and doctoral student in nursing.

Hickman felt especially honored with the award because it’s still so early in his teaching career.

Before being appointed as an assistant professor, he spent four years developing a program of research focused on innovative interventions to enhance health care decision-making and discovery of genomic biomarkers for chronic respiratory failure.

Hickman is among a handful of nurse scientists across the nation who has had the opportunity to receive an institutional career development award (KL2), which is a component of the School of Medicine’s Clinical and Translational Science Collaborative of Cleveland.

“Many of these health care decisions are life-changing and hold significant implications for patients and their families,” Hickman said.

This year, he taught courses in advanced pathophysiology to graduate nursing students. Hickman has instructed undergraduates in medical-surgical nursing and provided clinical instruction for courses in acute and critical care nursing.

Along the way, he’s learned the importance of spending time with students.

“The thing that makes Ron such a great mentor is his genuine interest in my well-being,” said one anonymous nominator, who considers the amount of attention Hickman gives students “unprecedented.”

“I call this paying it forward for the kinds of mentoring I received,” said Hickman.

He particularly recognizes the mentoring he received during his Frances Payne Bolton School of Nursing education from Barbara Daly, his doctoral adviser, and John Clochesy, a researcher he worked closely with on the development of a patient communication system called E-Smart.

“(Hickman is) very devoted to supporting young clinicians and researchers,” Daly said. “He is a talented teacher who routinely goes beyond the classroom in inspiring students and helping them design experiences to move their careers forward. Students view him as a role model in his ability to bring clinical realities to the classroom and generate excitement about discoveries that can make real contributions to patient care.”

“He has inspired me to do so much more with my nursing career; things that I never knew we were able to do,” Shui said.

Another student, who shares Hickman’s favorite off-campus activity of dining out, recalls having dinner with Hickman and other students.

Another anonymous nominator described such dinner talk as “one of the most honest and motivating conversations I have ever had with a professor,” adding that Hickman makes students feel human, and not just someone passing through campus.