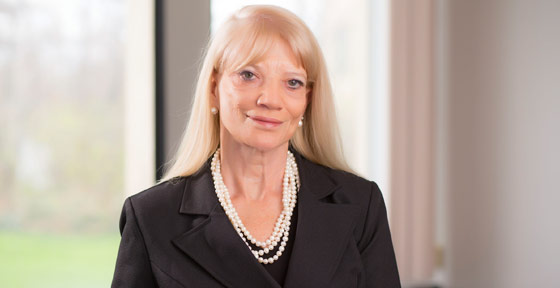 A champion of nurse leadership and an advocate for advancing global nursing excellence, Joyce J. Fitzpatrick, PhD, is a transformational leader who has played a crucial role in the development of nursing education at Case Western Reserve University (CWRU).

Fitzpatrick, the Elizabeth Brooks Ford Professor at the Frances Payne Bolton School of Nursing, will be honored as a Distinguished University Professor during fall convocation tomorrow, Aug. 26 (tune into a livestream of the event).

A former Frances Payne Bolton School of Nursing dean (1982-1997), Fitzpatrick has made advancing nurse leadership education a centerpiece of her tenure at the university.

“As dean, Dr. Fitzpatrick was a staunch advocate of the Doctor of Nursing Practice (DNP) precursor program, the Nursing Doctorate (ND) program, which was the first practice doctorate in the U.S. established by former dean Rozella M. Schlotfeldt,” wrote Carol Musil, current nursing dean, in her nomination of Fitzpatrick for the Distinguished University Professorship. “Dr. Fitzpatrick innovatively redesigned the now DNP program, integrating courses in leadership, systems change and finance.”

Musil said Fitzpatrick has been instrumental in bolstering the school’s dominance in DNP education, with program alumni who hold leadership positions in health care organizations, government agencies and nonprofit organizations in the U.S. and around the world.

Fitzpatrick’s management helped establish the university as a leader in gerontology, bringing the interdisciplinary University Center on Aging and Health (UCAH) to the school of nursing, where it has been an organizing force behind the university’s gerontology efforts. Among the many efforts supported by UCAH was a Robert Wood Johnson Foundation-funded teaching nursing home project that made geriatric care training an interprofessional priority. During her tenure as dean, the Florence Cellar Endowed Chair in Gerontologic Nursing, the first gerontologic nursing chair in the world, was established at the nursing school.

In addition to expanding the university’s focus on gerontology, Fitzpatrick’s deanship also saw the introduction of midwifery as an advanced practice specialty to help meet primary care needs of women in urban and rural areas of the U.S., Musil wrote in her nomination.

“The highest honor is to be recognized by one’s peers; I am thus deeply honored to be named a Distinguished University Professor at CWRU,” Fitzpatrick said. “I expect to continue my leadership legacy through the Marian K. Shaughnessy Nurse Leadership Academy’s mission to position the Frances Payne Bolton School of Nursing as the global leadership destination for nurses and the nursing profession.”

Fitzpatrick’s aptitude as an educator and mentor has had a profound impact on her students. Musil said Fitzpatrick challenges her students to think outside the box and envision their futures in leadership.