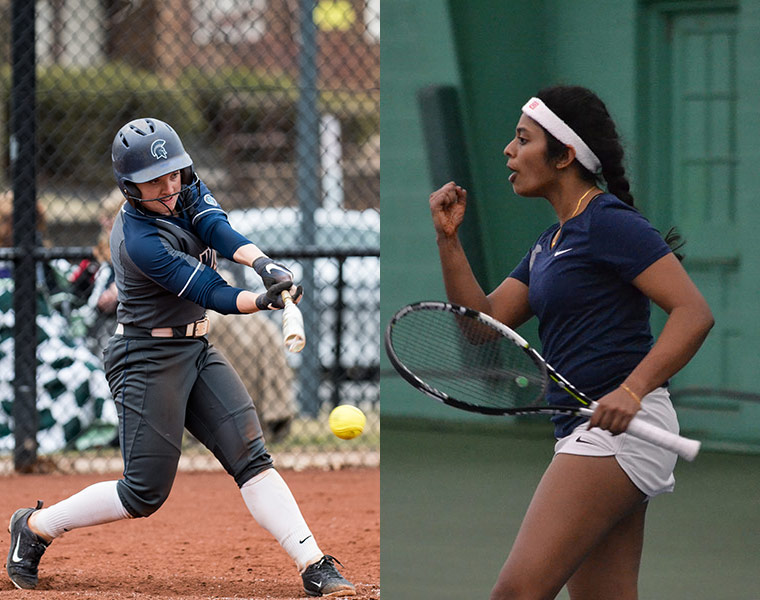 Article provided by CWRU Athletics. Read the original on their website.

Nicole Doyle, a 2019 graduate of Case Western Reserve University and a member of the softball team, and Nithya Kanagasegar, a 2018 graduate of the university and a women’s tennis player, have each been chosen to receive the prestigious NCAA Postgraduate Scholarship, presented to elite student-athletes who excel academically and athletically and who have completed their final year of intercollegiate athletics competition.

Both Doyle and Kanagasegar are the first-ever recipients of the scholarship in the history of their respective sports at CWRU. Case Western Reserve has now registered 31 total NCAA Postgraduate Scholarship Award winners since 1971, including 10 in the last four years.

Doyle and Kanagasegar will each receive a one-time, non-renewable scholarship of $10,000 to be used for postgraduate study.  The NCAA Postgraduate Scholarship is awarded three times a year corresponding to each sport season (fall, winter and spring). Twenty-one scholarships are available each sports season for women and another 21 scholarships are available for men across all NCAA Divisions (I, II & III) for use in an accredited graduate program.

In addition to softball and tennis, other spring sports sponsored by the NCAA whose participants were eligible for the spring scholarships include baseball, golf, lacrosse, outdoor track and field, men’s volleyball, women’s rowing, women’s beach volleyball, and women’s water polo.

Academically, Doyle completed her time at CWRU with a 3.787 cumulative grade point average as an accounting major, including a perfect 4.0 grade point average during her senior year. Over her career, she was named a NFCA All-American Scholar-Athlete and earned a spot on the UAA Presidents’ Council Scholar Athlete Team and claimed UAA All-Academic recognition. She plans to pursue a master’s degree in accounting at the Weatherhead School of Management.

Kanagasegar graduated from CWRU in 2018 as the most accomplished player in the history of the women’s tennis program. During her senior year, she became the first All-American in the program’s history, after teaming with Madeleine Paolucci to reach the quarterfinals of the doubles draw at the NCAA Championships. As a sophomore, she became the first player in program history to be named the UAA Most Valuable Player, and was a three-time All-UAA selection for her play at both singles and doubles.  Kanagasegar ended her career as the program’s all-time leader in doubles victories with a 76-32 ledger, and ranks third in school history in singles wins with a 56-48 record.

Kanagasegar graduated in the spring of 2018 with a cumulative grade-point average of 3.68 as a biomedical engineering major with a minor in chemistry. She was the winner of the ITA Ann Lebedeff Leadership Award in 2018, and was a multiple-time ITA Scholar-Athlete and UAA Presidents’ Council Scholar-Athlete selection. She is a first-year student at CWRU’s School of Medicine.

The NCAA Postgraduate Scholarship was created in 1964 to promote and encourage graduate education by rewarding the association’s most accomplished student-athletes through their participation in NCAA championship and/or emerging sports. Athletics and academic achievements, campus involvement, community service, volunteer activities and demonstrated leadership are evaluated. In maintaining the highest broad-based standards in the selection process, the program aims to reward those individuals whose dedication and effort are reflective of those characteristics necessary to succeed and thrive through graduate study.