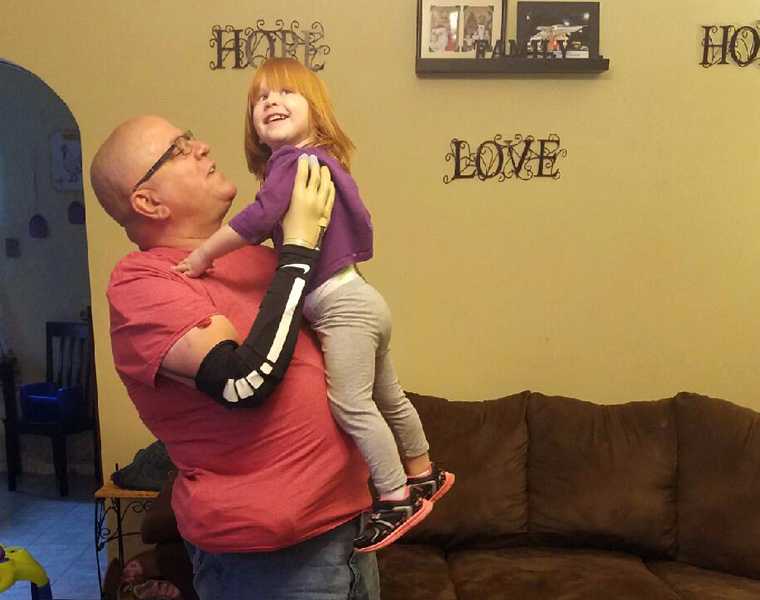 Electrical stimulation mimics natural touch, enabling amputees to feel a range of intensity that allows them to hold a child’s hand, precisely operate machinery and more

Walking through a busy store, Keith Vonderhuevel confidently held his 5-year-old granddaughter’s hand with his prosthetic hand. Feedback in the form of electrical pulses that mimic pressure told him how intensely he grasped her hand.

“And I can feel when she yanks her hand out,” said Vonderhuevel, of Sidney, Ohio.

At home, he used the prosthetic and his intact hand to pick up his 2-year-old granddaughter when she ran to him in his living room.

“Being able to grab her and feel I wasn’t squeezing too tight and to play with her is amazing,” he said.

Normally, amputees receive no feedback from their prosthetics and don’t like to shake hands, touch a face or hold a loved one for fear of hurting them.

But Vonderhuevel is one of two amputees who have been testing a prosthetic system that allows them to feel the same intensity of pressure on their prosthetic hands as they feel with their intact hands, researchers from Case Western Reserve University, the Louis R. Stokes Cleveland VA Medical Center and the University of Chicago report in a new study.

The scientists and engineers found how the nervous system encodes the intensity of tactile perception—something that was impossible to reveal studying intact hands alone, but essential to restoring the sense of touch and dexterity.

This work builds on earlier research that showed varying patterns of electrical signals provide the amputees with familiar sensations, such as the touch of a cotton ball or the press of the tip of a ball-point pen.

Their research is published in the journal Science Translational Medicine.

“The ability to discriminate how hard you’re applying pressure is key to complex manipulation of objects and for human interactions,” said Dustin Tyler, biomedical engineering professor at Case Western Reserve and the primary investigator of the research. “Electrical stimulation gives the subjects in this research the same sensitivity to hold or press as you and I have.”

How the system works

The system starts with pressure sensors on the prosthetic hand, sending signals to a portable stimulator. In turn, the stimulator sends electrical pulses to cuffs that encircle major nerve bundles in the arm—nerves that used to control the hand. Contact points on the cuffs transfer the electrical pulses, stimulating the nerves, which carry signals to the brain. The brain discerns different levels of intensity.

With the system, Igor Spetic, of Madison, Ohio, used his prosthetic hand to operate a lathe. He deftly turned the handle to shave different sections of a spinning aluminum bar to different diameters, trimming hundredths of an inch with each pass.

“I could feel the handle with the prosthetic hand and, instead of watching the hand, I watched the part—as you’re supposed to,” Spetic said.

He can squeeze a line of ketchup on a hot dog without spilling, pick up eggs off the counter without breaking them, hold a heavy frying pan or dog on a leash and use yard tools—and so can Vonderhuevel.

“I squeeze harder if the object is harder or heavier, but if it’s fragile, I stop squeezing as soon as I feel sensation,” Spetic said.

In this study, led by Emily Graczyk, a PhD student in Tyler’s lab, the researchers found that Spetic and Vonderhuevel can discern 20 distinct levels of intensity that the volunteers interpreted as pressure.

They tested the volunteer’s ability to discern intensity three ways:

During the last test, the researchers found that Spetic and Vonderhuevel could reliably correlate the two.

On an intact hand, increasing pressure on the skin increases the firing rate of nerve fibers at that location and nearby fibers are also recruited, or activated. But until now, no one knew for sure how each of these neural responses influences sensory magnitude.

“People have been trying to study this a long time, but you can’t study it with an intact hand—when it touches something, both processes occur,” Graczyk said.

The researchers found that the electrical pulse frequency affects the firing rate of the nerve fibers and the charge per pulse affects the neural recruitment.

“We can decouple the intensity and frequency of the electrical signal and deliver one at a time,” Graczyk said.

By doing so, the researchers found that perceived intensity is predicted by the combination of pulse frequency and charge per pulse. They call this parameter the activation charge rate.

Sliman Bensmaia, associate professor of organismal biology and anatomy at the University of Chicago, is a senior author of the study. He predicted from earlier research that, in response to a given stimulus, the number of times populations of nerve fibers fire— known as the population spike rate—would determine the perceived intensity of a stimulus.

The study confirmed his hypothesis, showing the activation charge rate approximates the total spike rate evoked in the activated nerve bundle. The finding helps the researchers understand how people perceive what’s in their hands, which will lead to better prosthetics, Tyler said.

“The more natural the feedback they receive,” Tyler said, “the less someone has to concentrate and look at the prosthetic hand, and the more normal the operation. But the real implications go well beyond that. This may enable us to retrieve tactile information remotely, the way we use cameras to see remotely.”

In the future, the operator of a robotic explorer on the ocean floor or a bomb-squad robot could feel through the controls what the robots touch, Tyler said.

To learn more, the researchers are exploring what sensations the electrical signals produce and how the sensations improve functional capabilities. The volunteers will continue to test take-home versions of the prosthetic system.

The research is supported by the Defense Advanced Research Projects Agency (DARPA) HAPTIX program through the Space and Naval Warfare Systems Center, Pacific (SSC Pacific) under Contract No. N66001-15-C-4014; Merit Review Award #I01 RX00133401 and Center #C3819C from the United States (U.S.) Department of Veterans Affairs Rehabilitation Research and Development Service Program; the National Science Foundation under Grant No. DGE-1451075; and Arthritis and Musculoskeletal and Skin Diseases Institute of the National Institutes of Health under award number T32AR007505.