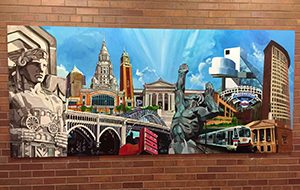 A new mural in Case Western Reserve’s School of Law melds landmarks across Cleveland on a single canvas teeming with color.

But the 4-by-9-foot artwork does more than exhibit regional pride in the atrium of George Gund Hall. Given by the law school’s class of 2015 and crafted by Cleveland School of the Arts students and faculty, the mural showcases the power of collaboration among students, alumni and the community.

Each year, the third-year, or 3L, class makes a gift to the law school, a process led by a committee of Student Bar Association (SBA) leadership. The group solicits ideas and donations for the gift from their classmates.

“We had always discussed giving something that would be visible to the student body,” class of 2015 SBA president Charlotte Green (CWR ’12, LAW ’15) said.

The committee mulled over options ranging from a coffeemaker to a tree planted near the school. After conducting an online poll of the class, the mural depicting Cleveland emerged as students’ top choice.

For the past three years, alumnus Robert S. Reitman (LAW ’58) has matched the funds raised by third-year classes for their gifts.

“The 3L class gift program is a wonderful opportunity to create a lasting bond between students and Case Western Reserve University School of Law,” he said. “I became involved because I feel it’s critical to teach future generations about the importance of giving back and staying engaged.” 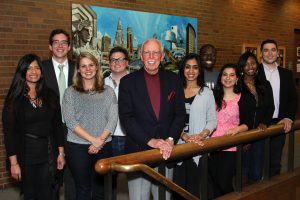 Carver and his high school students recently completed a mural honoring four-time Olympic gold medalist Jesse Owens, who grew up in Cleveland. It hangs at the Lonnie Burten Recreation Center in the Central neighborhood on the city’s east side. Carver and his students now are working on a mural celebrating Cleveland’s bridges for downtown law firm Ulmer & Berne LLP.

The murals provide Carver’s students with experience interacting with clients and producing professional quality work. And, Carver noted, the projects show artists they can make a living with their artistic abilities.

“The composition ties everything together,” Carver said of the mural’s design. “That’s what’s so amazing. There’s so much—architecture, bridges, sculptures, statues, the West Side Market—and it all works together as one unit.”

After incorporating feedback on the design from the law school, Carver and CSA seniors Kieran Delaney and Zhaphar Weaver drew and then painted the artwork. Cleveland artist Rick Davis also contributed to the project. All told, they invested 280 hours from concepts to completion.

Greene shares Carver’s enthusiasm for the mural. In reflecting on the project, Greene is proudest of how her classmates engaged in supporting the gift.

Over just three months of active fundraising, Greene noted, many students moved from being completely unaware of the class gift program to contributing their own money to it.

“I think it sets a really good example for future classes of what they can do for the school,” she said.