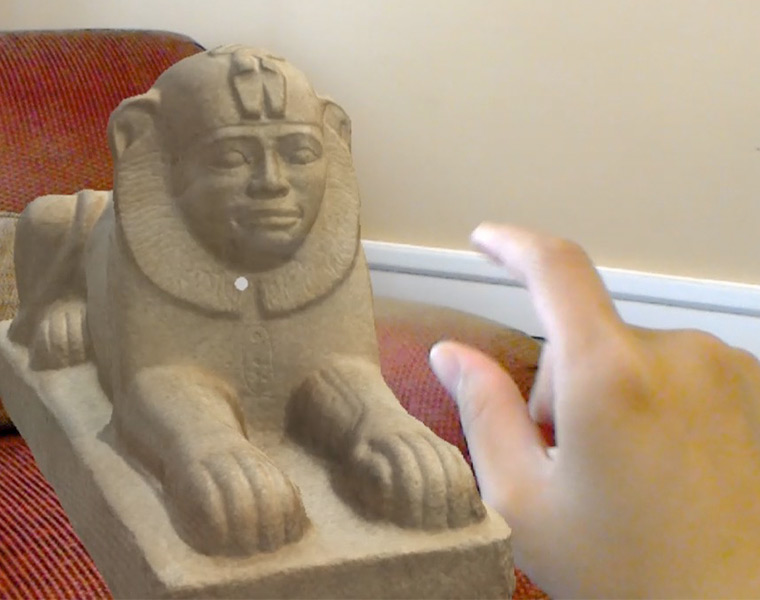 Holly Witchey traveled more than 3,200 miles in seconds—and speed wasn’t even the most impressive part of the feat.

Standing in the basement of a building on Case Western Reserve University’s campus, the adjunct professor of art history and art suddenly found herself standing in The Courtauld Gallery in London, close enough to touch several of its Impressionist masterworks.

Witchey’s extraordinary experience came courtesy of Boulevard Arts, a free app now available in the Microsoft HoloLens store. The app allows those wearing Microsoft’s mixed-reality headset to see 18 works from The Courtauld Gallery and the British Museum—no matter where they are in the world.

“Boulevard was founded on the vision that we wanted to democratize access to art and culture,” Co-Founder and CEO Elizabeth Reede said. “We want to offer people a way into these experiences so they can make them their own.”

“It’s really exciting working with Boulevard because they have access to digital assets that no one else in the world has,” said Griswold, also the leader of the university’s Interactive Commons.

With HoloLens, viewers not only can see holograms—here, paintings and historic objects—but also other people, whether they are in the same physical space, or connected virtually.

“I may be looking at something completely different than another person in the app with me, but I can say, ‘Come over here, take a look at this,’” Reede said. “It allows you to feel as though you are there together and learning collaboratively.”

Each work is accompanied by an extended label and audio narration. New York Times best-selling author Neil Gaiman provides voiceover for The Courtauld Gallery, and Patricia Wheatley, head of broadcast for the British Museum, does the same for her institution.

With HoloLens, Witchey could enlarge paintings to see details invisible to the naked eye, or walk around pieces like the nearly 9-foot-tall Bust of Ramesses II, which itself sits on a base several feet high in the British Museum. Describing Manet’s iconic painting A Bar at the Folies-Bergère, featuring a red-haired barmaid standing before a mirror, Witchey observed, “You can see reflections in the pearl earrings she wears.”

Founded in 2013, Boulevard has established relationships with over 30 arts and cultural institutions providing direct access to premium content. The recently released American Experience includes 77 paintings, historic documents, photographs and objects from the National Gallery of Art, the Library of Congress, the White House and the U.S. Capitol collections. Boulevard’s newest experience, Operation Independence, challenges users to solve puzzles and discover a secret message based on information culled from Revolutionary War-era assets.

In addition to developing the HoloAnatomy app, the team at Case Western Reserve’s Interactive Commons has assisted students on projects like a 3-D map of campus buildings that highlights varying energy usage, and faculty on ones including a visualization of physics concepts. Leaders of the university and Cleveland Clinic first learned about Microsoft HoloLens three years ago, and immediately saw its potential to transform learning in their joint Health Education Campus. The Interactive Commons team’s primary task is to develop an entire holographic anatomy curriculum to coincide with the first classes when the new building opens in the summer of 2019.