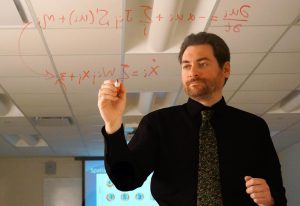 When Roberto Fernández Galán, assistant professor of neuroscience, proposed investigating how neuronal activity in brain circuits relate to autism, The Hartwell Foundation supported the idea. Galán recently received a 2013 Hartwell Individual Biomedical Research Award, which placed him in a line of notable researchers at Case Western Reserve that have earned the prestigious recognition.

The Hartwell Individual Biomedical Research Award funding goes to scientists for early-stage, innovative and cutting-edge research to benefit children. The Hartwell Foundation will provide research support for three years to Galán at $100,000 direct cost per year for his investigation of “Cortical Network Dynamics and Epileptiform Activity in Autism: From Animal Models to Children.”

“We don’t have a clear understanding of what autism is, but we know that other conditions often occur with autism, and there must be a mechanistic link between them,” said Galán, also a Mt. Sinai Scholar. “A highly frequent one is epilepsy, which is also the most dangerous because it can lead to unexpected death in many children with autism.”

His research approach is also particularly novel. He will examine how neuronal activity propagates in specific brain circuits to complement the molecular, genetic and brain imaging approaches that most neuroscientists pursue in autism research today. Galán will study autism mouse models compared to wild type mice for clues about whether neuronal activity propagates differently, and if so, why. Later in the research, he might also attempt correction of any differences he discovers in the propagation of neural activity.

Another component of his project involves collaborating with Ingrid Tuxhorn, professor of pediatrics at the school of medicine and division chief of pediatric epilepsy at University Hospitals Case Medical Center and UH Rainbow Babies and Children’s Hospital. They will collect brain electrical recordings called electroencephalograms (EEGs) of children who have both autism and epilepsy in search of an EEG-based biomarker specific to those conditions.

“A current hypothesis is that autism is due to different wiring of the brain at different levels,” Galán said. “This may explain why it is related to epilepsy. So I want to investigate if those abnormal circuits in a mouse model of autism are also more susceptible to develop epileptic activity and why.”

Galán looks forward to the challenge of an ambitious project, but fortunately, The Hartwell Foundation funds high-risk, transformative research projects that other funding agencies and institutions do not support. “I am very pleased to have received this prestigious award,” he said.

Galán came to CWRU by way of Carnegie Mellon University, preceded by his doctoral work in Germany in theoretical biology with a focus on computational neuroscience and graduate studies in his home country, Spain, in fundamental physics. From this education and experience, he formulated a unique goal—to develop computer models of neuronal circuits, investigate their function with computer simulations and learn how to blend electrophysiology with biology. His lab at CWRU has provided him the opportunity to achieve his goal.

“I find it rewarding to combine computational work with the experimental work,” Galán said. “I also enjoy engaging in multidisciplinary science and collaborating with other scientists and clinicians.”

Because CWRU’s nominee was selected for a Hartwell Individual Biomedical Research Award, CWRU was awarded a Hartwell Fellowship to fund one postdoctoral candidate of its choice who exemplifies the values of the Hartwell Foundation. Hartwell Fellowships offer support for two years at $50,000 direct cost per year for scientists in the early stages of their research careers by enabling them to pursue further specialized training as part of professional career development.

Case Western Reserve has five scientists who are current or former Hartwell investigators:

Learn more about The Hartwell Foundation at thehartwellfoundation.org.