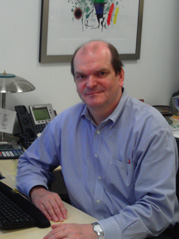 Imagine an instrument that peers deep inside the eye and sees how well the retina’s cells function. Such advanced technology would provide unprecedented options for early detection of disease—not only of the eye, but other organs as well. Case Western Reserve University Professor Krzysztof Palczewski believes he can create this revolutionary device—and the federal government has invested up to $3.3 million to support his efforts.

Palczewski plans to create a two-photon ophthalmoscope, in which two photons interact with matter nearly simultaneously to excite molecules critical for vision. This approach will enable new levels of magnification of the retina, all the way down to the cellular level.

Palczewski’s proposal is one of only five to secure funding from a National Eye Institute (NEI) program called the Audacious Goals Initiative (AGI). Launched in 2012, the AGI sought to identify the top priorities for vision research breakthroughs over the next 10 to 15 years. The agency originally received 450 proposals, and from there began narrowing the field to identify key themes for research investments. Not surprisingly, the retina figures prominently in the effort.

The retina is a paper-thin slice of tissue at the back of the eye that takes the images created by light and converts them into electrical signals that in turn travel through the optic nerve to the brain, which tells the person what is seen. Damage to the retina can make images appear blurry, obscure vision in the center or edges of the eye, or even lead to complete blindness.

The earlier issues can be identified, however, the more likely it is that they can be corrected or at least slowed. Perhaps even more noteworthy is that some problems identified in retinas relate not to vision, but other parts of the body.

“Heart disease, metabolism disorders and faulty glucose function—everything is in the retina,” Palczewski said. “It is one of the most active tissues in the body. It takes approximately 10 percent of the oxygen circulating in the body to support vision in two tiny retinas, so anything you find in the retina reflects the status of your body.”

Palczewski, the John H. Hord Professor and chair of the Department of Pharmacology, serves as principal investigator on the project, and will collaborate with scientists from Harvard, the University of Pennsylvania, Washington University at St. Louis, Cleveland Clinic and University Hospitals Case Medical Center. Case Western Reserve scientists also will work with Polgenix, a Cleveland-based biotech company that Palczewski helped launch, in crafting the special ophthalmoscope. Both Palczewski and his wife Grazyna have equity stake in Polgenix. He is chief scientific officer, and she is director of medical devices.

The development of the two-photon ophthalmoscope will draw upon findings about two-photon excitation published Dec. 16, 2014, in PNAS (Proceedings of the National Academy of Sciences). Scientists from the Palczewski Lab and Polgenix Inc., discovered that humans are able to perceive infrared radiation light through the vision process activated by two-photon excitation.

The heart of the special ophthalmoscope project involves photon excitation technology. Because the two-photon light wave is so strong, one of the challenges for scientists will be to make it safe for the human eye, yet maintain its magnification strength.

In addition to financing the construction of the special ophthalmoscope, the NEI grant will fund safety and efficacy testing of the instrument in animals and humans. First, Case Western Reserve scientists, in collaboration with Polgenix, will test two-photon excitation technology in animal models. That research will inform scientists about refinement of the two-photon ophthalmoscope for humans. The constructed instrument will then be tested initially in larger animals, and if proven safe, testing of the special two-photon ophthalmoscope will progress to humans. The study in humans will involve 10 participants with significant vision impairment caused by end-stage eye diseases.

During the study, participants will have their retinas examined using three technologies: the new two-photon ophthalmoscope, scanning laser ophthalmoscopy (SLO) and optical coherence tomography (OCT). Investigators will rely on SLO and OCT, today’s newest, state-of-the-art retina imaging modalities, to monitor the conditions of the study participants’ eyes before and after use of the two-photon ophthalmoscope. The idea is to assess the safety of the extra-long wavelength of light on the eyes of study participants.

“Good study results would provide us with first proof-of-concept that this two-photon technology delivers greater visualization of the retina than the existing SLO and OCT technologies,” Palczewski said. “In addition to early detection, we want this instrument to lead to discovery of therapies that would prevent or reverse retina pathology. The intricacy of this imaging technique is very critical to this goal.”

During his 10 years at Case Western Reserve, Palczewski has recruited vision scientists from all over the world from different disciplines, among them medicine, engineering and the basic sciences. These scientists have researched extensively pharmacology and the fundamental processes of the eye and vision, including the flow of vitamin A into the eyes.

“Our department is absolutely unique in our research capacity to go from biochemistry to imaging of large animals all together in one place,” Palczewski said. “Those qualities made us very competitive in receiving the grant. Even though it took us a year to receive the award, this has been a ‘sprint’ in NIH terms. Usually, it takes at least two years.”