A new magnetic resonance imaging (MRI) contrast agent being tested by researchers at Case Western Reserve University not only pinpoints breast cancers at early stages but differentiates between aggressive and slow-growing types.

“Doing both will help doctors find the right treatment,” said Zheng-Rong Lu, the M. Frank Rudy and Margaret Domiter Rudy Professor of Biomedical Engineering at Case Western Reserve and leader of the research. “There’s no such technology available now that we know of.”

The gadolinium-based agent is also more efficient and safer than traditional agents, requiring a gadolinium dose 20-times smaller, easily flushing from the body and leaving no accumulation in tissues, the researchers found in tests with mouse models. 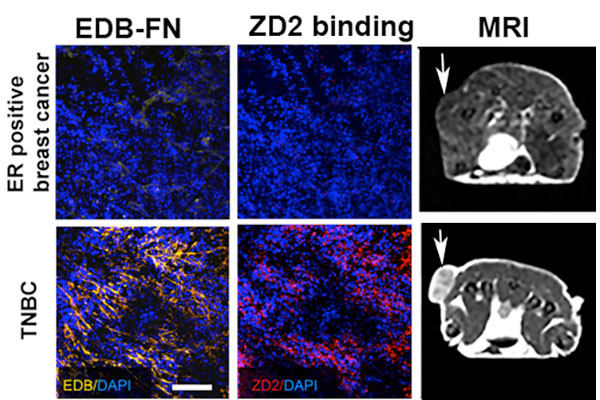 The figure shows the different expressions of the biomarker (EDB-FN) and probe binding (ZD2) in slow-growing ER-positive breast cancer (not much yellow and red color representing low expression of the biomarker and low binding), and in triple- negative breast cancer (TNBC, high expression and high binding). As a result, the targeted contrast agent produced weak signal enhancement (brightness) in the former and strong signal (brightness) in the latter as referenced by the arrow.

At the low dosage, the agent lights up cancer biomarkers during scans, overcoming the low sensitivity of MRIs for imaging the markers. The research was published today (Sept. 25) in Nature Communications.

Compared to the gadolinium used in traditional agents, Gd3N@C80’s “structure is different—the gadolinium ions are encaged in a hollow molecule of fullerene that looks like a soccer ball,” Lu said. “The cage prevents direct contact between the gadolinium and tissue, and the gadolinium will not be released, which prevents any kind of interaction with tissue.”

“But the key technology for our targeted contrast agent is the peptide attached,” Lu said.

The lab applies ZD2 to the surface of the soccer ball. The peptide specifically targets the cancer protein extradomain-B fibronectin (EDB-FN). EDB-FN, which is associated with tumor invasion, metastasis and drug resistance, is highly expressed in the matrix around cancerous cells in many aggressive forms of human cancers. 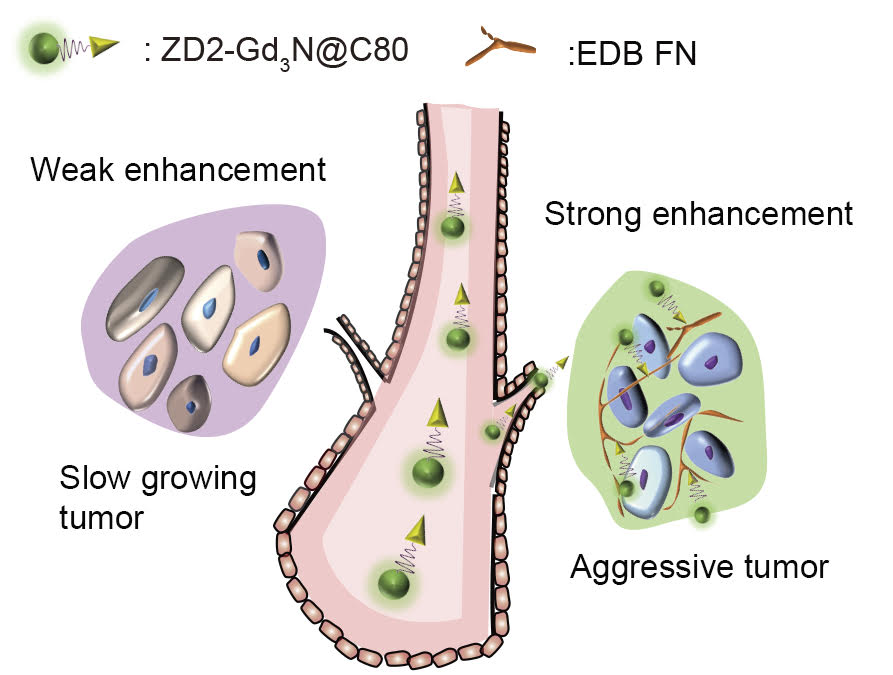 The illustration represents the concept of the work. The targeted contrast agent, ZD2-Gd3N@C80, binds to aggressive tumor and produces strong signal enhancement, but not in a slow-growing tumor, which allows detection and risk-stratification of breast cancer.

Lu’s lab is now investigating ways to reduce the cost of producing the agent to make it more attractive for clinical use.