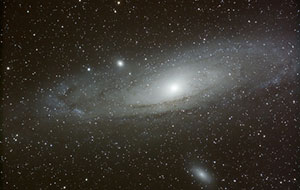 Using modified laws of gravity, researchers from Case Western Reserve University and Weizmann Institute of Science closely predicted a key property measured in faint dwarf galaxies that are satellites of the nearby giant spiral galaxy Andromeda.

To calculate the velocity dispersion for each dwarf galaxy, the researchers utilized Modified Newtonian Dynamics, MOND for short, which is a hypothesis that attempts to resolve what appears to be an insufficient amount of mass in galaxies needed to support their orbital speeds.

MOND suggests that, under a certain condition, Newton’s law of gravity must be altered. That hypothesis is less widely accepted than the hypothesis that all galaxies contain unseen dark matter that provides needed mass.

McGaugh teamed with Mordehai Milgrom, the father of MOND and professor of physics and astrophysics at Weizmann Institute in Israel. Their study, “Andromeda Dwarfs in the Light of MOND” will be published in the Astrophysical Journal, and is posted on the electronic preprint archive, available at arxiv.org/abs/1301.0822.

Astronomers and physicists need some way to explain why galaxies rotate faster than predicted by the law of gravity without flying apart. That spurred researchers to theorize that dark matter, first assumed by Dutch astronomer Jan Oort in 1932, is gathered in and around galaxies, adding the mass needed to hold galaxies together.

Dissatisfied with that hypothesis, Milgrom offered MOND, which says that Newton’s force law must be tweaked at low acceleration, 11 orders of magnitude lower than what we feel on the surface of the Earth. Acceleration above that threshold is linearly proportional to the force of gravity—as Newton’s law states—but below the threshold, is not, he posits. When the force law is tweaked under that limitation, the modification can resolve the mass discrepancy.

Early in his career, McGaugh believed in dark matter. But, over time, he’s found the hypothesis comes up short in a number of aspects while he’s found increasing evidence that supports MOND.

In this paper, researchers tested MOND with dwarf spheroidal galaxies. These very low-surface brightness galaxies are satellites of larger galaxies. By the standards of galaxies they are tiny, containing only a few hundred thousand stars.

“These dwarfs are spread exceedingly thin. Their light is spread over hundreds to thousands of light-years. These systems pose a strong test of MOND because their low stellar density predicts low accelerations,” McGaugh said.

McGaugh and Milgrom used the luminosity of the galaxies, an indicator of stellar mass, and MOND to make their calculations and predict the velocity dispersions of 17 faint galaxies. In 16 cases, the predictions closely matched the velocity dispersions measured by others. In the last case, the data from independent observers differed from one another.

The scientists also used MOND to predict velocity dispersions for 10 more faint dwarf galaxies in Andromeda. They are awaiting measurements to refute or verify this prediction.

McGaugh’s work was supported in part by NSF grant AST0908370.