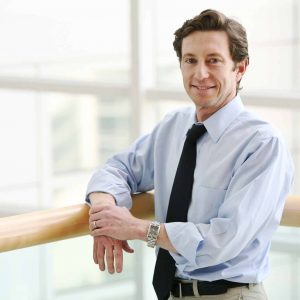 Professor Jonathan Stamler’s latest findings regarding nitric oxide have the potential to reshape fundamentally the way we think about the respiratory system—and offer new avenues to save lives. It may be time to rewrite the textbooks.

Scientific dogma has the respiration process involving only two elements—oxygen and carbon dioxide. Specifically, the delivery of oxygen from lungs to tissues, and the removal of the waste product, carbon dioxide, through exhaling.

Recently published online in the journal Proceedings of the National Academy of Sciences (PNAS), Stamler and colleagues demonstrate that nitric oxide is essential for the delivery of oxygen to the cells and tissues that need it.

Stamler, a professor of medicine at Case Western Reserve University School of Medicine and cardiologist at University Hospitals Case Medical Center, led a team that showed that nitric oxide must accompany hemoglobin to enable blood vessels to open and then supply oxygen to tissues.

Doctors have long known that a major disconnect exists between the amount of oxygen carried in the blood and the amount of oxygen delivered to the tissues. Until now, they had no way to explain the discrepancy. The new findings show that nitric oxide within the red blood cell itself is the gatekeeper to the respiratory cycle—nitric oxide makes the cycle run.

“The bottom line is that we have discovered the molecular basis of blood flow control in the respiratory cycle loop,” Stamler said. “It’s in the hemoglobin protein itself, which has the ability to deliver the nitric oxide together with oxygen. The simplified textbook view of two gases carried by hemoglobin is missing an essential element—nitric oxide—because blood flow to tissues is actually more important in most circumstances than how much oxygen is carried by hemoglobin. So the respiratory cycle is actually a three-gas system.”

Stamler’s previous research had revealed that the respiratory cycle was more than an oxygen and carbon dioxide exchange proposition. Stamler and colleagues also had shown that red blood cells carry and release nitric oxide, but had not yet explained the exact physiologic ramifications of nitric oxide release.

In this most recent research, investigators uncovered the key role of nitric oxide in controlling the blood flow in small vessels within tissues responsible for delivering oxygen (known as “blood flow autoregulation”)—a process whose molecular basis had been a longstanding mystery in medicine. Investigators specifically examined the respiratory cycle in mice lacking the one amino acid site that carries nitric oxide in their red blood cells. Low and behold, blood flow autoregulation was eliminated entirely—the animals could not oxygenate tissues.

Initially, investigators found low oxygen levels in the animals’ muscles at baseline, despite the animals’ red blood cells carrying a full load of oxygen. When the mice were then stressed to bring on slight oxygen deprivation (hypoxia), the blood flow to their organs dropped precipitously. The lack of oxygen should have prompted a spike in blood flow to send more oxygenated blood to tissues and cells. Instead, the reduced blood flow and ensuing oxygen shortfall triggered heart attacks and heart failure in these nitric oxide-deficient animals.

“These mice had red blood cells that by all traditional measures are completely normal in carrying oxygen and releasing it and then in picking up carbon dioxide, yet these animals cannot oxygenate their tissues,” said Stamler, director of Case Western Reserve’s Institute for Transformative Molecular Medicine. “Lacking nitric oxide in red cells, oxygen deficiency could not induce vasodilation, which is essential for sustaining life as we know it.”

Historically, the control of blood flow has been thought to be the purview of blood vessels and their endothelial linings, while the role of the red blood cell went unappreciated. Blood flow deficits that cause heart attacks and strokes were thought not to be linked to red blood cells.

“Within the tissues, the tiny vessels and the red blood cells together make up the critical entity controlling blood flow,” Stamler said. “Red blood cell dysfunction is likely a hidden contributor to diseases of the heart, lung and blood such as heart attack, heart failure, stroke and ischemic injury to kidneys.”

Low nitric oxide levels in red blood cells make blood disorders, such as sickle cell anemia, particularly dangerous. Laboratory research has shown that the red blood cells in individuals with these conditions do not trigger the hypoxic vasodilation required for blood flow autoregulation to work well.

In addition, blood transfusions, which have recently been shown to be deficient in nitric oxide, are associated with increased morbidity and mortality, including heart attacks. The effects of blood transfusions are suspiciously similar to effects seen in the mice, Stamler said. They both lack nitric oxide.

“It’s not enough to increase to oxygen content of blood by transfusion; if the nitric oxide mechanism is shot, oxygen cannot make it to its destination,” he said. “We know that blood in a blood bank is deficient in nitric oxide, so infusing that blood may cause plugging of blood vessels in tissues, making things worse. Essentially, blood flow cannot autoregulate (increase) without nitric oxide. In terms of developing future therapies, the goal must be restoring red blood cell function, complete with nitric oxide delivery capability. As for the nation’s blood supply, the blood should be replenished with nitric oxide.”