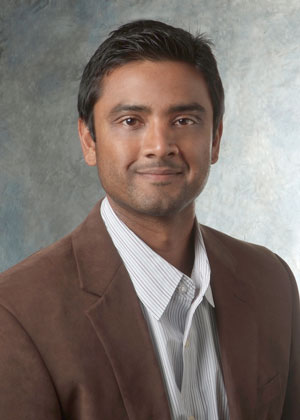 The student, Megan Witzke, will graduate this month as a published researcher. She’ll enter a PhD program this fall as one of fewer than 100 chemical engineering students nationwide to receive a National Science Foundation Graduate Research Fellowship.

Based heavily on Witzke’s success and recommendation, Sankaran, a Case Western Reserve University faculty member since 2005, won a J. Bruce Jackson Award for Excellence in Undergraduate Mentoring. J. Bruce Jackson (ADL ’52) established the award in 2003 in honor of the late Dean Carl F. Wittke, Jackson’s mentor during his undergraduate years.

The Jackson Award celebrates faculty and staff who have guided a student in his or her academic and career paths, fostered the student’s long term personal development, challenged the student to reflect, explore and grow as an individual and supported and/or facilitated the student’s goals and life choices.

“He pushed me; he saw there was this potential in me,” Witzke said. “He has guided me to be the researcher I am today.”

In fact, Witzke says he’s the reason she came to Case Western Reserve. As an accepted student, she took a second tour of campus and, in a small gathering, Sankaran explained that undergraduates may start research their first year.

She had visions of going into industry after college and wanted to participate in undergraduate research. Within days, she’d emailed Sankaran. He invited her to join his lab and, the week after graduating from Brecksville-Broadview Heights High School, she started.

“I gave her a few things to work on and she kept coming back,” he said. “She wasn’t the normal student, doing this a few hours a week.”

Sankaran pursued his undergraduate education at UCLA, intending to become a doctor or have a career in industry. But his research mentor, Harold Monbouquette, professor of chemical and biomolecular engineering, sat him down and put another possibility on the table.

“He said I could go the academic route, become a professor,” and offered to help if that’s what he decided, Sankaran said. “It kind of blew me away. I didn’t think a professor would take the time.”

He changed career plans and worked closely with Monbouquette. “I realized how important mentoring is through that experience,” he said.

By her junior year, Witzke was unsure of her future and started taking classes to earn bachelor’s and master’s degrees in engineering.

Sankaran noticed, and “had a life-changing discussion with me,” she said. “He complimented me on the research I had done so far and told me I am the type of student who would excel in graduate school.”

She had worked hard, but had attributed her research success to the luck of meeting Sankaran. Witzke replayed their conversation in her head several times and knew he was right.

“From that point on, Dr. Sankaran created unique opportunities for me that would help me achieve my new goal,” she said.

They designed research projects she could complete and write about before graduation.

Witzke co-authored a published paper describing how to use a microplasma as an electrochemical electrode, and was first author on another describing how electrons from the plasma pull hydrogen protons from a water anode, producing hydrogen gas. A third paper is in the works.

Sankaran helped her choose the PhD program at the University of Illinois at Urbana-Champaign, and even her new adviser. He then urged her to apply for the NSF fellowship and reviewed her application essays.

Sankaran said he’s honored to receive the Jackson Award, but added that Witzke, who was motivated and curious from the start, deserves the credit.

Mentoring such students is a two-way street that helps him learn, Sankaran said.

Sankaran shares this year’s Jackson honors with Ronald Hickman Jr., assistant professor of nursing. They will receive recognition during commencement ceremonies on Sunday, May 19.