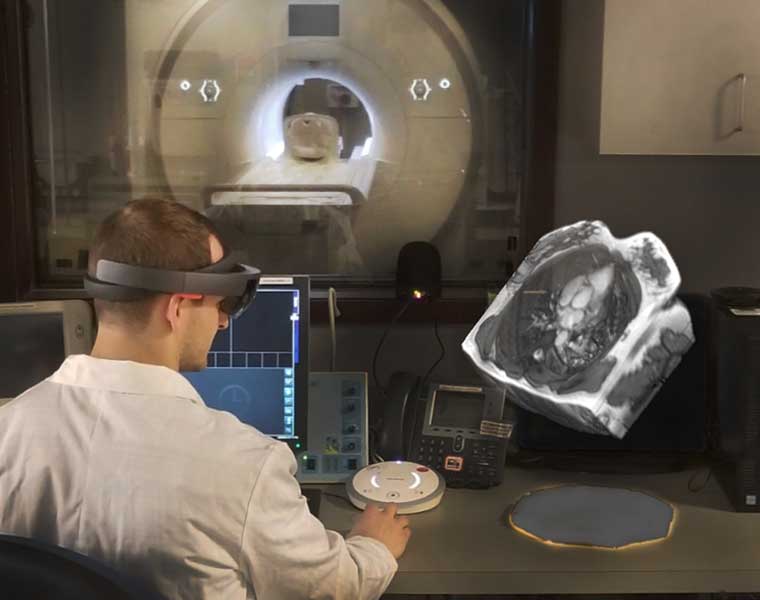 After an exceptional experience together using holograms for learning, Case Western Reserve and Microsoft are collaborating again—this time with quantum computing.

Radiology Professor Mark Griswold, faculty lead for the first project, also will direct the university’s engagement on this initiative, which aims to improve diagnoses drawn from MRI results in unprecedented ways.

The centerpiece of the effort involves Magnetic Resonance Fingerprinting (MRF), an innovative approach to imaging data that would allow quicker and more accurate detection of developing diseases such as cancer, multiple sclerosis, or heart trouble.

Griswold and his colleagues first described the groundbreaking method in a 2013 article in the journal Nature, and have continued to refine and apply it in subsequent research. Among the greatest constraints to their progress, however, has been the sheer amount of data and complexity of calculations required.

Enter Microsoft Quantum, launched more than a dozen years ago and now poised to reshape our understanding of how computers can work—and, even more—all that they can do. Unlike current machines that are limited to using only ones or zeros (binary digits, or bits), quantum computers can hold multiple values simultaneously and, in turn, offer exponentially greater computing power. A calculation that would take one of today’s computers many years to complete would require only a few minutes, possibly seconds, in a quantum-based model.

“We are thrilled to partner with Microsoft again on another project that expands our understanding of what technology can make possible,” Griswold said. “Quantum computing provides an opportunity to find the truly best way to scan patients. We are so excited to explore how far we can push these new quantum and quantum-inspired methods beyond traditional computer algorithms.”

The concept of quantum computing is decades old, but has not yet been translated to regular practice because of challenges inherent in the very qualities that make it so appealing. A quantum bit (commonly called a qubit) can be a 1 and a 0 at the same time, but is also less stable. The slightest disturbance—from the environment or even surrounding qubits—can cause such severe problems that not only does a calculation stall, the information it contains can disappear altogether.

This spring, Microsoft announced a new approach to qubits that its leaders believe will allow them to function in a much more reliable and steady manner. The company predicts it will have working versions before year’s end—making the timing of this new collaboration particularly apt for both organizations.

“We see incredible possibilities to not only improve the quality of health care and medical research,” Todd Holmdahl, Corporate Vice President of Microsoft Quantum, wrote in a company blog announcing the partnership, “but also demonstrate how quantum computing, machine learning and mixed reality can be combined to turn challenges of the past into solutions of the future.”

Griswold and his team will work with Microsoft’s quantum computing experts to improve the practical ways that MRI machines acquire information during scans. That process involves posing questions that today’s computers would take far too long even to begin to solve. Once the partners secure the answers needed, Griswold and his team will call upon lessons learned in the previous collaboration, which originally involved the company’s not-yet-released Microsoft HoloLens device. Specifically, the teams plan to create a three-dimensional holographic model of the scan’s results—providing a vivid and more easily understood sense of the nature of the disease, or its healing.

The earlier Microsoft HoloLens project involved an effort of Cleveland Clinic and the university to explore potential applications of the holographic technology to teaching anatomy to medical students. CWRU since has expanded upon that project on which the university and Cleveland Clinic teamed. Through a broader initiative known as the Interactive Commons, the university has used Microsoft HoloLens in support of undergraduate senior projects, teaching physics, and a mixed-reality museum app with Boulevard Arts Inc., among other efforts.