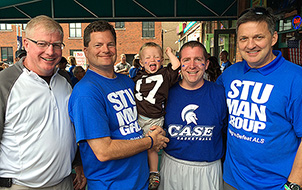 This past Sunday went in the books as a celebrated day in Cleveland sports history. The Indians clinched the top spot in the American League Wild Card race, and the Browns defeated in-state rival Cincinnati to move into first place in the AFC North. But, there was one other accomplishment during the day that involved Cleveland sports—somewhat—that likely will go unnoticed by most.

Stuczynski, a 2009 inductee of the university’s Spartan Club Hall of Fame, was diagnosed with Amyotrophic Lateral Sclerosis (ALS) in the spring. Sunday, he was joined by members of the Case Western Reserve University men’s basketball team— as well as droves of his family and friends—in becoming the largest group to participate in the 14-year history of the Cleveland Walk to Defeat ALS.

A number of Stuczynski’s former teammates, current friends and family assembled the “STU Man Group” to walk in Sunday’s event. Led by friend and business partner Todd Sherwood, the group shattered its original goal and raised $89,000 to donate in Stuczynski’s name.

Known by many as “Stu”, Stuczynski played tight end and wide receiver for the Case Western Reserve football team during the mid-1980s, one of the winningest eras in school history. Stuczynski was an Associated Press All-American his junior year and an Associated Press and Pizza Hut All-American during his senior season. He also played for the Spartan basketball team and remains one of its most involved alumni.

“I can either hide from ALS and pretend it’s not happening, or I can embrace the fight and try to do whatever I can to help raise awareness,” said Stuczynski.

“In the midst of receiving life-altering news, Stu was thinking of others,” noted Sherwood. “This should come as no surprise to anyone who knows David Stuczynski. He has always shown a genuine interest and concern for others. Whether it is through his charitable contributions with The Alzheimer’s Association, fundraising efforts for Case Western Reserve, Brecksville High School, or other local schools/youth sports organizations, Stu is there asking what he can do to help rally support.

According to Mary Wilson Wheelock, executive director of The ALS Association Northern Ohio Chapter, “STU MAN Group” is expected to be one of the largest Walk to Defeat ALS fundraising teams across the nation this year.

“I knew Sunday was going to be special when I drove down East 9th Street that morning and saw a sea of blue and grey,” said 1985 graduate Dave Hollis. “It was the sight of the Spartan basketball sweatsuits and seeing Coach McDonnell pushing his 2-year-old son (Conor) in a stroller—such is the loyalty of the CWRU family. It is a shame that this wretched disease has struck such a great person like Stu. However, knowing the toughness of this amazing person, I am confident that he can beat the odds. In his typical selfless manner, Stu continues to inspire acquaintances, co-workers and close friends with his positive attitude and dedication to his family. Stu is the epitome of a successful Case Western Reserve alumnus.”

“Stu is a grinder, and he will fight this disease head-on,” said Sherwood. “This statement has been echoed by countless friends and family members. Whether it is playing golf, pick-up hoops, business dealings, coaching, and I’m sure during his playing career at Case, Stu is definitely a grinder and does not give up. There’s not a chance that Stu will stray from this as he takes on Lou Gehrig’s disease.”