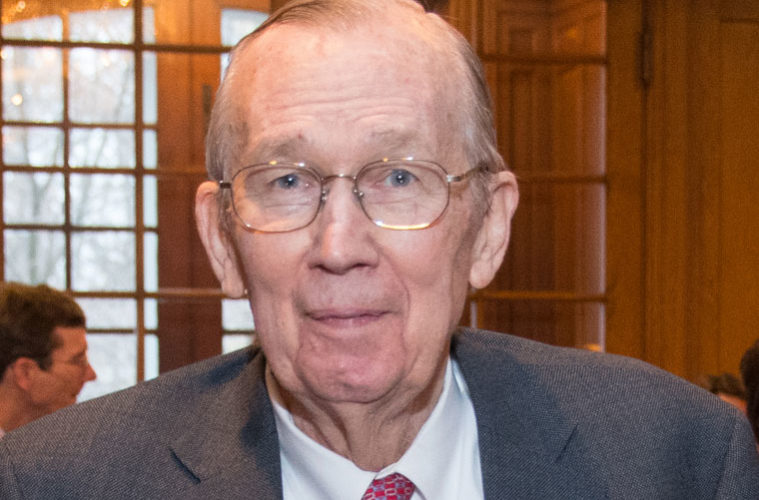 Tomorrow the campus community is invited to remember law school alumnus Phillip “Phil” Ranney, whose exceptional philanthropic service made him one of a select group to receive the President’s Award for Visionary Achievement (PAVA).

“Phil’s sincerity and fundamental decency inspired me from our very first meeting,” President Barbara R. Snyder said. “During our many conversations over the years, I had the privilege to observe those qualities in detail, as well as his quick wit, deep wisdom, and profound commitment to Case Western Reserve. I feel honored to have known him, and grateful for the many ways he helped make our campus and community better places for us all.”

A longtime officer of the Kent H. Smith Charitable Trust, Ranney collaborated with close friend and fellow trustee Bill La Place to ensure the charitable organization’s grants honored the legacy of its late founders, Kent and his wife, Thelma.

An alumnus who went on to co-found the company now known as Lubrizol, Kent served as a trustee and, later, as its interim president. In 1971, the pair created the 1525 Foundation as a vehicle to allow them to make anonymous philanthropic contributions around the community.

After their deaths, the foundation took on its current name but—thanks to Ranney and La Place—maintained its mission of helping individuals and organizations help themselves.

Over the years, the trust awarded more than $130 million to organizations across Northeast Ohio, including nearly $50 million to Case Western Reserve. Its grants have supported such endowed faculty positions as the engineering’s Kent H. Smith Professors in and the Elmer G. Beamer – Hubert H. Schneider Chair in Ethics. They also granted funds to projects ranging from the Kelvin Smith Library and Kent Hale Smith Building to Sears think[box] and the Wyant Athletic and Wellness Center. Ranney and LaPlace also awarded a $10.5 million challenge gift to the Tinkham Veale University Center.

In announcing the PAVA at 2015’s Commencement exercises, President Snyder said: “It is a privilege to be able to honor two people who, working quietly behind the scenes, have made such an important impact…your dedication, commitment and leadership have made an indelible impact.”