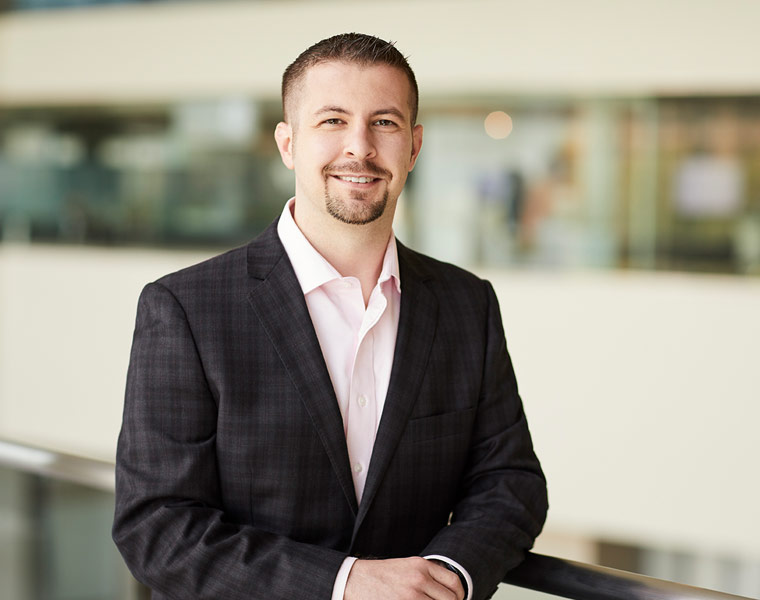 There are treatments, but no cures, for millions of people worldwide suffering from diseases such as multiple sclerosis, cerebral palsy and leukodystrophies (rare genetic diseases that affect the brain and spinal cord). This is why Paul Tesar and his lab continue to conduct promising translational research using stem cells to develop new therapeutics that may someday lead to a cure.

“The best thing about being a mentor,” said Tesar, “is watching the students develop not only needed skills but also the confidence to become independent and chart their own career paths. It’s amazing to watch them grow, mature and become great at whatever they decide to do.”

His dedication to his students is just one of the reasons why Tesar has been honored with the  J. Bruce Jackson, MD, Award for Excellence in Undergraduate Mentoring. He will receive the award during commencement ceremonies Sunday, May 17.

A Cleveland native, Tesar is professor of genetics and genome sciences and the Dr. Donald and Ruth Weber Goodman Professor of Innovative Therapeutics at Case Western Reserve University’s School of Medicine. After earning his undergraduate degree in biology from CWRU in 2003, Tesar completed his PhD from the University of Oxford in 2007 as a recipient of a prestigious scholarship from the National Institutes of Health.

Tesar returned to Cleveland in 2010 to join the School of Medicine faculty, where he leads an internationally recognized research laboratory focused on stem cell biology and developing medicines for neurological disorders.

As a CWRU undergraduate, he had three mentors who influenced not only his scientific approach and decisions, but also the way he runs his lab and his commitment to support and be available for his students. Tesar balances that support by ensuring a level of independence so students feel engaged in the scientific process.

“Undergraduate students are absolutely instrumental in the research that we do,” said Tesar. “As we continue through the COVID-19 pandemic, our undergraduate students  are learning remotely and not coming into the lab as social distancing dictates. We miss them terribly as  their technical and intellectual support are key engines that keep the lab running.”

He is currently mentoring seven undergraduate students, and has mentored nine others since the lab’s inception in 2010. Alumni from this group have matriculated into prominent MD or MD/PhD programs at CWRU, The Ohio State University, Harvard University and several others. Two of his students won first place in the Michelson-Morley competition, the top science award given for undergraduate research in the biological sciences—an award Tesar himself won when he was an undergraduate.

“Our lab is a family,” Tesar said. “It’s my job to provide a positive, welcoming environment where everyone feels safe and supported, not only on the science side but also in life, enabling them to grow and flourish professionally and personally.

“Most of science is frustrating, and when things don’t work, we need to try a new hypothesis,” Tesar said. “Most likely we’ll end up in a good place, but the path to arrive there is very challenging. CWRU undergraduate students are outstanding, and therefore, they are not used to failure. But in science, failing is not only the norm, but it’s also what takes you to the solution, and when an experiment doesn’t work, that gets you to the next step. It’s a hard process to learn when you’ve been at the top of most things for your entire life.”

“2019 was Paul’s year,” said one of the students who recommended Tesar for the Jackson Award, “building Convelo (a successful new biotech company), being recognized as one of Crain’s Cleveland Business’ Forty under 40, getting promoted to professor, and more. His successes speak for themselves, but I am here to speak to his great mentorship of me throughout the past three years. I hope that I have conveyed how truly lucky I feel to be his mentee. He is my role model and, in the future, I would be beyond proud to be even half of the visionary, scientist, and leader that he is today.”

The Jackson Award for Excellence in Undergraduate Mentoring recognizes the positive impact Case Western Reserve University faculty and staff have on the lives of students. It was established by J. Bruce Jackson, Adelbert ’52, in honor of Dean Carl F. Wittke, who served as an advisor, mentor, and friend to Dr. Jackson when he was an undergraduate student at Western Reserve University.