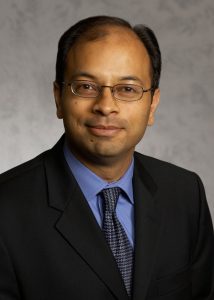 School of Medicine professor Mukesh K. Jain has been elected to serve as vice president of the American Society for Clinical Investigation. In the subsequent two years he will serve as president elect and ultimately president for one of the country’s oldest and most prestigious physician-scientist societies.

The first faculty to represent the university on the ASCI council, Jain joins an elite group, including past presidents who have gone on to leadership roles at the National Institute of Health as well as numerous academic medical centers throughout the United States. Previous presidents also include several members of the National Academy of Sciences as well as Lasker and Nobel Prize recipients. Jain is a professor of medicine, Ellery Sedgwick Jr. Chair, and director, Case Cardiovascular Research Institute at Case Western Reserve School of Medicine and the chief research officer, Harrington Heart & Vascular Institute at University Hospitals Case Medical Center.

In the early 2000s, Jain made headlines in the medical research community when his laboratory identified a family of factors termed Kruppel-like Factors that regulate critical aspects of cardiovascular biology, innate immunity, and metabolism. Since this initial discovery, these research efforts have spawned novel areas of investigation with therapeutic implications for a broad spectrum of pathologic states including chronic inflammatory disorders, heart failure, metabolic dysregulation, and regenerative medicine.

“This is truly a wonderful achievement and well deserved,” said Pamela B. Davis, dean of the School of Medicine and vice president for medical affairs at Case Western Reserve University. “Dr. Jain’s work with Kruppel-like Factors has enormous potential in many disease areas. His enthusiasm for investigative research is contagious.”

In 2012 as vice president of ASCI, Jain will focus on three main areas. First, in conjunction with leadership of other major societies, he will actively engage policymakers to enhance support for biomedical research. In addition, he will encourage and facilitate trainee involvement and retention in the society at early career stages. Finally, Jain will consider new pathways to help nurture and sustain the academic careers of physician-scientists.

“I am both humbled and honored to have the opportunity to serve in this capacity for the ASCI. We are in the midst of a very uncertain period for academic medical centers with major changes in healthcare reform that will affect clinical activities and flat NIH funding that adversely impacts investigative activities. The ASCI provides a platform to address these difficult issues at the national level, and I hope to be an actively engaged in such efforts,” Jain said.