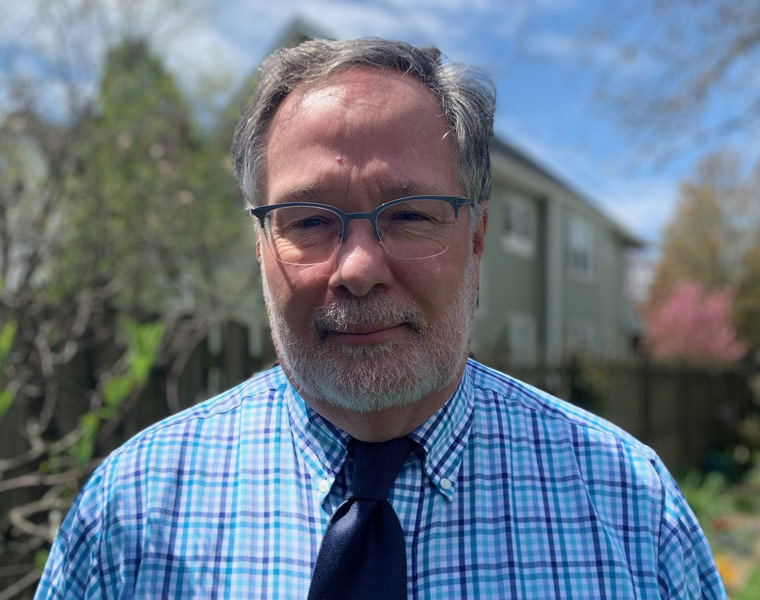 Until he became an instructor himself, James “Jim” Spilsbury thought the quality of a college course was strictly up to the professor.

But once in that role, while teaching his first few anthropology classes at Case Western Reserve University, it quickly dawned on him: The success of a course is as much dependent on those sitting in the classroom as the person standing before them.

That realization became the first of three principles Spilsbury uses to guide his teaching—that the experience and expertise students bring into the classroom can serve as much a learning tool as anything presented in a textbook or lecture.

“And I’m really lucky because my students make my job easy,” said Spilsbury, an associate professor in the Department of Population and Quantitative Health Sciences at the School of Medicine. “Many of the students I get to teach are already professionals; most are clinicians. I try to take advantage of what the students bring to it. Discussing pulmonary disease? Here, you’ve got pulmonologists taking the course. So take advantage of that, ask them about it, have them talk about it.”

For that personal, interactive approach and more, Spilsbury, who holds secondary appointments in the departments of pediatrics and anthropology, was recognized with a 2020 John S. Diekhoff Award for Distinguished Graduate Teaching. He will receive the award during the university’s virtual commencement May 17.

“I just feel honored,” said Spilsbury, who earned a PhD in anthropology and completed two postdoctoral fellowships at Case Western Reserve. “This is the best way I know how to repay or thank the teachers and mentors I’ve had here who have been so instrumental in me developing my career—and that’s to try to be the best teacher I can be to help students in their pathways.”

Incorporating substantial hands-on experiences is another teaching priority. Given the importance of peer review in science, all his courses include opportunities for students to practice the critical skills of providing and receiving peer feedback.

Spilsbury also takes student feedback seriously. For instance, when some students told him they wanted to hone their interviewing skills with journalists, he used a “special topics” course to develop a seminar co-taught by a senior reporter/weekend anchor of a local television station. Students were interviewed by the reporter and filmed by a TV cameraperson—then critiqued by the class, the reporter and cameraperson included.

“Jim’s classes include assignments and hands-on activities that turn lectures into truly salient learning experiences that I still carry with me as I’ve progressed further into the program,” wrote a graduate student in a recommendation letter for the award. “…Jim’s classes always strike the appropriate balance between offering foundational knowledge in translational science and pushing students to apply those concepts to their own research in innovative and original ways.”

When a student who described herself as having “only a bachelor’s degree” was uneasy about giving a scientific presentation to a class filled with doctors, she and Spilsbury brainstormed about a suitable topic. She had first-hand experience of the challenges a researcher faces trying to do a study in a large city after a natural disaster, having lived through Category 4 Hurricane Irma. Her presentation was a hit and generated a lively discussion, he said.

“He is the kind of professor you know will always have your back, and there is no stronger student advocate than Dr. Spilsbury,” wrote another graduate student in a recommendation letter. “He is the kind of faculty who makes Case Western (Reserve) the top-notch university that it is, and so attractive to young clinical researchers.”