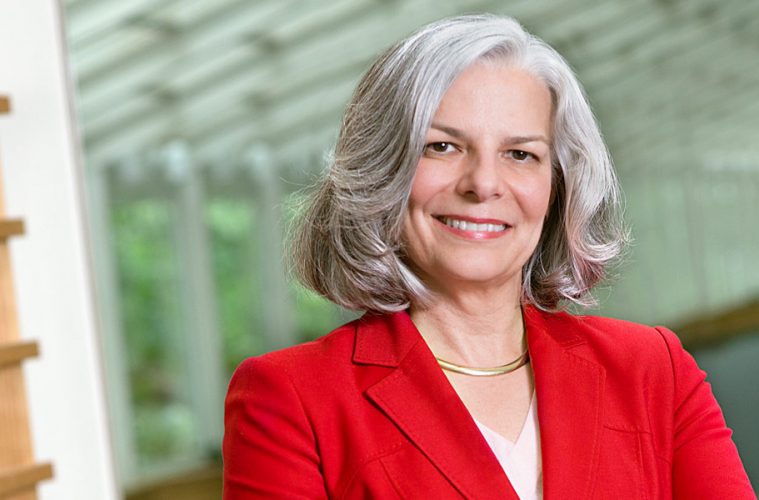 Interim Dean Stan Gerson announced the news yesterday at the School of Medicine’s White Coat Ceremony, an annual event for first-year medical students as they begin their studies and take an Oath of Professionalism.

“Dr. Gerberding exemplifies the values we seek to instill in our medical students,” Gerson said. “She believes passionately in the importance of welcoming every patient with dignity and compassion, relying on evidence to inform treatment, and advocating for better care for all.”

The societies exist to enhance the sense of community among students as they navigate the rigors of medical school. Each is named after an accomplished physician with significant school ties—for example, former dean and Nobel Prize-winner Frederick Robbins and alumnus and public health pioneer H. Jack Geiger.

Recent growth in the size of incoming classes prompted the school to add a sixth society this year to keep the groups at a size that allows them to fulfill their purpose. A group of school leaders identified a large list of potential candidates for the honor, then narrowed the pool to three finalists sent to school alumni for vote. Gerberding was the overwhelming choice.

“My time at Case Western Reserve set the foundation for my entire life in medicine,” Gerberding said. “To receive this honor, from a place that gave me so much, means more than I can begin to convey.”

A South Dakota native, Gerberding earned both her bachelor’s and medical degrees from Case Western Reserve University. She did her internship and residency at the University of California at San Francisco (UCSF), ultimately serving as chief resident.

Gerberding arrived in San Francisco the same year that the U.S. CDC first reported on the illness now known as AIDS (Acquired Immunodeficiency Syndrome). While UCSF became one of the nation’s leaders in research and treatment of HIV and AIDS, in 1981 no one even knew what caused what was then an often-fatal condition.

“It made us become better doctors,” Gerberding said of the early absence of information. “We had to listen closely to our patients to understand their broad needs and what we might be able to do to help. The experience deepened our humility—and our empathy.”

It also drove Gerberding to complete a fellowship clinical pharmacology and infectious diseases after her residency, and earn tenure in the UCSF infectious diseases division. Along the way she also earned a master’s degree in public health from the University of California at Berkeley.

In 1998 Gerberding became the CDC director of healthcare quality and promotion. Four years later, she became the first woman to lead the agency; her tenure witnessed an unprecedented number of major public health crises, among them SARS, avian influenza, monkeypox, and Hurricane Katrina.

It also saw her complete the CDC’s first major restructuring in decades, an effort designed in part to enhance the agency’s ability to respond to public health threats, including infectious disease outbreaks. In 2010 Gerberding—also a CWRU trustee—joined Merck & Co., Inc. as president of the vaccines division; five years later she became a corporate Executive Vice President and the Chief Patient Officer.

As news of a novel coronavirus in China began appearing in U.S. media in January of 2020, Gerberding was among the first experts that outlets like National Public Radio and NBC News contacted for insight. Her knowledge and perspective have continued to be in demand ever since; last month she authored a piece in Time magazine regarding the need for a global pandemic surveillance network, appeared in a New York Times magazine story titled “Can the CDC Be Fixed” and was quoted by Bloomberg regarding the potential need for vaccine booster shots.

Meanwhile, this spring Merck entered a historic partnership to help manufacture more of Johnson & Johnson’s COVID-19 vaccine—an agreement expected to double production by the end of this year, and is pursuing a novel antiviral medicine that may help prevent serious SARS-CoV-2 complications and related hospitalizations.