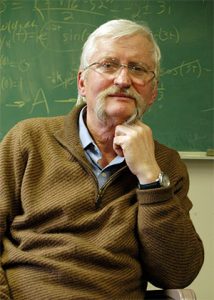 Longtime university mathematics professor Peter Kotelenez, an expert in stochastic differential equations, died Wednesday after a long battle with cancer. He was 69.

A member of the Case Western Reserve faculty since 1990, Kotelenez published widely on stochastic differential equations, Brownian motion and colloid particle interactions. Put in simplest terms, he pursued mathematical explanations for phenomena that often appeared random. His approaches proved so compelling that in 2007 Springer published his 460-page textbook, Stochastic Ordinary and Stochastic Partial Differential Equations: Transition from Microscopic to Macroscopic Equations. He also taught courses on a variety of topics, including, most recently, Elementary Differential Equations. In addition, he organized a Case Western Reserve seminar series that focused on applied mathematics and drew participants from across the university.

Born in Berlin, Kotelenez later received his doctoral degree and “habilitation”—the highest academic qualification an individual can earn in Europe—from Universität Bremen. He then taught at Rijksuniversiteit Utrecht, Netherlands, from 1987 to 1990 before joining the faculty at Case Western Reserve University in 1990. He became a full professor in 1994.

He is fondly remembered by his colleagues for his impressive research and his dedication to his students.

“I always enjoyed my discussions with Peter, whether we were talking about his work on stochastic differential equations or about his students. He really cared about his students and was eager to have them all really understand what he was teaching,” remembered Cyrus C. Taylor, dean of the College of Arts and Sciences. “I think he will be missed very much. I know I will miss him.”

Chemical engineering professor J. Adin Mann, who worked with Kotelenez on research for a number of years, agreed. “Peter was a good friend and wonderful collaborator,” he said. “I remember fondly our many years of collaboration with Marshall Leitman on the foundations of random motion of various nanoparticle dispersions. We will miss him.”

Visitation will be held tonight from 6 to 8 p.m. at St. Sergius Russian Orthodox Cathedral (6520 Broadview Road, Parma). Funeral services will begin at 10 a.m. Friday, Jan. 4, at St. Sergius cathedral. Interment will follow at St. Theodosius Cemetery. Memorial contributions may be made to the cathedral in his name.