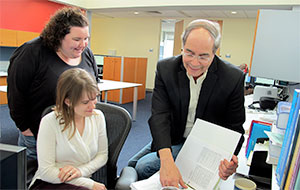 What makes social work professor Mark Singer such an effective mentor is he never forgets the challenges he faced as a Case Western Reserve University graduate student.

He recalls the heavy workload and preparations for his doctoral exam, financial burdens and all-consuming researching and writing of a dissertation.

Singer’s mindfulness and sensitivity to his students’ needs have earned him the 2013 John S. Diekhoff Award for Mentoring. He is the first professor from the Jack, Joseph and Morton Mandel School of Applied Social Sciences to receive the prestigious honor in mentoring.

The Graduate Student Senate selects award winners from nominations from graduate students recognizing faculty who have impacted their lives. Only doctoral students are eligible to nominate at the social work school.

This was the second Diekhoff nomination for Singer, the Leonard W. Mayo Professor in Family and Child Welfare, co-director of the Center on Substance Abuse and Mental Illness, and deputy director of the Dr. Semi J. and Ruth W. Begun Center for Violence Prevention Research & Education. He was first nominated in 2011.

He advises four doctoral students and serves on many dissertation committees. In addition to advising, Singer also teaches the social justice course during the school’s annual international experience in the Netherlands. Campus classes include The Philosophy of Science and Theory Construction, and Social Work Intervention in Alcohol and Other Drug Abuse.

He collaborates with the Cuyahoga County Metropolitan Housing Authority (CMHA) in a program that trains CMHA police how to respond to domestic calls and connect families and individuals with appropriate social services.

What makes Singer an outstanding mentor, they said, is that students can come to him for advice on just about anything—even restaurants.

In his 25 years on the faculty, he has probably seen and heard it all and knows how to handle anything from unreasonable requests to research issues, they said.

Singer can help students by drawing from his years of field experiences as a caseworker for 60 Bedford-Stuyvesant families that were clients of the welfare department in Brooklyn, N.Y., and as director of adolescent services at both St. Vincent Charity Hospital and the Cleveland Metropolitan General Hospital.

Bartholomew described Singer as a “student-centered, transformative mentor … that possesses an infectious zeal for both the social work profession and academics. Dr. Singer gets it,” from the intellectual, financial and motivational challenges of the doctoral experience.

“Doctoral students give up much and live on the edge,” said Singer, who has advised about 20 students.

One mentoring experience in particular stands out.

Singer noticed how a student who was helping him with research data would pick up food here and there around the university. He later learned it was because the student couldn’t afford groceries.

“After that, the student always had food to eat,” said Singer, who preferred not to discuss what he did for his assistant.

It’s just that kind of care for his graduate students that prompted Bartholomew and Kobulsky to nominate him.

Singer’s nominators described his ability to connect with a student’s interest and passion, and then letting the scholar foster his or her own creativity.

Bartholomew actually changed advisers after her first year to work with Singer.

Initially, the award recognized two faculty members who excelled in teaching; in 2009, the School of Graduate Studies expanded the award to honor faculty members with strong graduate mentoring skills. The Graduate Student Senate is responsible for the entire Diekhoff award decision-making process. Members of the Mentoring and Diekhoff Committee, chaired by Mark Barnes, reviewed nominations, interviewed nominees and selected winners from a large pool of candidates.