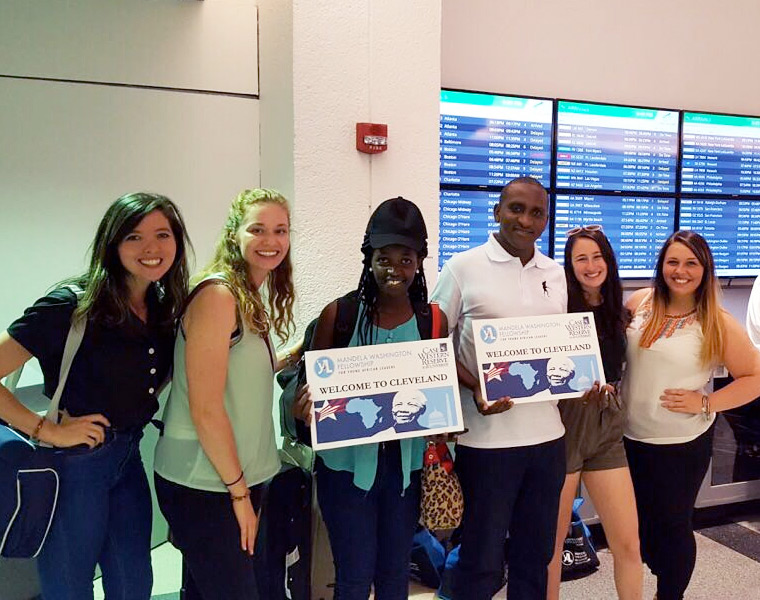 Three students from the Jack, Joseph and Morton Mandel School of Social Sciences have spent their summer in an immersive international experience—without ever leaving Cleveland.

It’s all been part of an internship with Case Western Reserve University’s Young African Leaders Initiative (YALI) program, which began in June.

The interns are a crucial piece in the program’s success. They have largely become the fellows’ go-to resources for questions, whether it’s about navigating the city or U.S. culture in general. They also help the fellows connect with outside organizations to build their networks. Plus, they’ve given the fellows insight into Cleveland, introducing them to various restaurants and nightlife and tourist attractions like the Rock and Roll Hall of Fame.

The internship has given Corrigan, Schmidt, Wigal and Lacks the opportunity to develop practical skills in social work, such as flexibility and seeing things from new perspectives.

“A lot of our social work curriculum relies on being culturally competent,” Wigal said. “This program teaches us that even more in a hands-on fashion.”

Added Schmidt: “You couldn’t do [social work] without building relationships in whatever situation you’re in. That’s the nice thing about social work: You can learn from everyone.”

One of the fellows is a social worker from Botswana. The interns have connected with her to better understand the similarities and differences in the field between the two countries.

But they’re learning about more than just international differences. Though Corrigan and Lacks previously had visited Africa, all of the interns said they had a limited understanding of the continent’s different cultures. Now, they have an added appreciation for its rich diversity.

“They’re all so humbly passionate about their cultures and where they’re from,” Schmidt said.

For Corrigan, who served in the Peace Corps in West Africa, meeting the fellows made her re-evaluate the perceptions she had of the continent. The Africa she experienced was largely rural, but the fellows were from cities.

“I always welcome the opportunity to be wrong. As much as I try not to, I have my own biases based on my own two years in Africa that are really special to me,” she said. “I love catching myself being like, ‘Oh, you imagined something about their life that is totally not what it was.’”

Though the program wraps up this week, the interns hope to stay in touch with the fellows—and maybe even visit them someday.

“Even if it was only six weeks, Schmidt said, “we’re always going to remember this.”