It was a normal Sunday in Cleveland, but it would be police officer Wayne Leon’s last.

Quisi Bryan, a felon with an outstanding warrant for a parole violation, shot and killed officer Leon after being pulled over in 2000 for a traffic violation in the city’s Warehouse District.

Reactions to that senseless death inspired a national program, called Fugitive Safe Surrender (FSS), to help prevent others from falling at the hands of criminals willing to do whatever it takes to avoid being arrested for outstanding warrants and sent to prison. 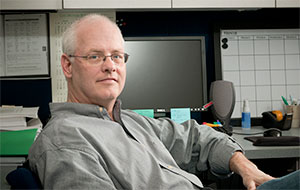 “Police are at risk from people who want to flee, and individuals with open warrants often refuse to talk to law enforcement when crimes happen in their neighborhood for fear of being discovered,” said Daniel Flannery, a professor from the Jack, Joseph and Morton Mandel School of Applied Social Sciences and author of Wanted on Warrants (Kent State University Press, 2013), a new book that tells the history of the Fugitive Safe Surrender program.

Fugitive Safe Surrender was an initiative of the U.S. Marshall’s Office in 2004 that continued until federal funding for the program from the U.S. Department of Justice ended in 2010.

The program offered people on the run for misdemeanor or non-violent felony violations and missed court appearances the opportunity to take responsibility for what they had done. Many came to the sanctity of a trusted local church—a hallmark of the program—to do so.

Flannery, the Dr. Semi J. and Ruth W. Begun Professor and director of Case Western Reserve’s Begun Center for Violence Prevention Research and Education at the Mandel School, provides a history of the program that involved working with police, local churches, community activists and the media.

Wanted on Warrants includes excerpts from news clippings, overviews of each city’s surrender and comments from some who surrendered about why they turned themselves in. The book also offers information for communities interested in replicating the model started in Cleveland.

As one of the researchers who surveyed those with outstanding warrants who turned themselves in, Flannery was present when the first surrender took place at the Mt. Sinai Baptist Church on Woodland Avenue on Cleveland’s East Side in 2005.  Since then, he has visited all but two of the 22 sites to record what about the program worked and what didn’t.

“No one knew if anyone would show up,” he recalled. But when Mt. Sinai opened their church doors for several days, hundreds surrendered to reclaim their lives by taking responsibility.

By 2010, more than 36,000 people with over 50,000 outstanding felony and misdemeanor warrants surrendered at 22 FSS sites. Many did so in hopes of securing a driver’s license, a job and a better life for themselves and their families.

Media, like the Commercial Appeal in Memphis, Tenn., hailed the program as a shining example of how public-private partnership can work.

Flannery dedicates his book to those who surrendered for a second chance at life. He also honors the hundreds of people who staffed the surrenders, from the local host churches to the police and court system and even the driver’s license bureaus that set up what Flannery describes as a big-box shop to take care of all the loose ends surrounding the outstanding warrants.