A team of scientists has announced the discovery of a 3.4 million-year-old partial foot from the Woranso-Mille area of the Afar region of Ethiopia. 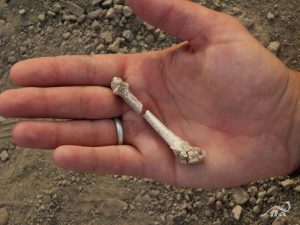 The fossil foot did not belong to a member of “Lucy’s” species, Australopithecus afarensis, the famous early human ancestor.

Research on this new specimen indicates that more than one species of early human ancestor existed between 3 and 4 million years ago with different methods of locomotion. The analysis will be published in the March 29 issue of the journal Nature.

The partial foot was found in February 2009 in an area locally known as Burtele.

“The Burtele partial foot clearly shows that at 3.4 million years ago, Lucy’s species, which walked upright on two legs, was not the only hominin species living in this region of Ethiopia,” said lead author and project leader Yohannes Haile-Selassie, curator of physical anthropology at The Cleveland Museum of Natural History.

“Her species co-existed with close relatives who were more adept at climbing trees, like ‘Ardi’s’ species, Ardipithecus ramidus, which lived 4.4 million years ago.”

The partial foot is 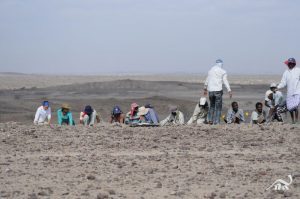 the first evidence for the presence of at least two pre-human species with different modes of locomotion contemporaneously living in eastern Africa around 3.4 million years ago.

While the big toe of the foot in Lucy’s species was aligned with the other four toes for human-like bipedal walking, the Burtele foot has an opposable big toe like the earlier Ardi.

“This discovery was quite shocking,” said co-author and project co-leader Bruce Latimer of Case Western Reserve University. “These fossil elements represent bones we’ve never seen before. While the grasping big toe could move from side to side, there was no expansion on top of the joint that would allow for expanded range of movement required for pushing off the ground for upright walking. This individual would have likely had a somewhat awkward gait when on the ground.”

The new partial foot specimen has not yet been assigned to a species due to the lack of associated skull or dental elements.

The fossils were found below a sandstone layer. Using the argon-argon radioactive dating method, their age was determined to be younger than 3.46 million years, said co-author Beverly Saylor of Case Western Reserve University. 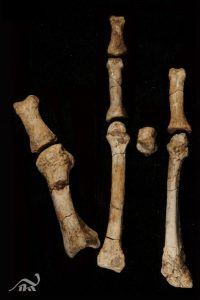 “Nearby fossils of fish, crocodiles and turtles, and physical and chemical characteristics of sediments show the environment was a mosaic of river and delta channels adjacent to an open woodland of trees and bushes,” said Saylor. “This fits with the fossil, which strongly indicates a hominin adapted to living in trees, at the same time ‘Lucy’ was living on land.”

Other major contributors to the research include: Alan Deino, of the Berkeley Geochronology Center, Berkeley, Calif.; Naomi E. Levin, of Johns Hopkins University; and Mulugeta Alene, of Addis Ababa University.

Information and images at cmnh.org/site/burtele.aspx.

A video can be seen at: youtube.com/user/NatureVideoChannel/featured.