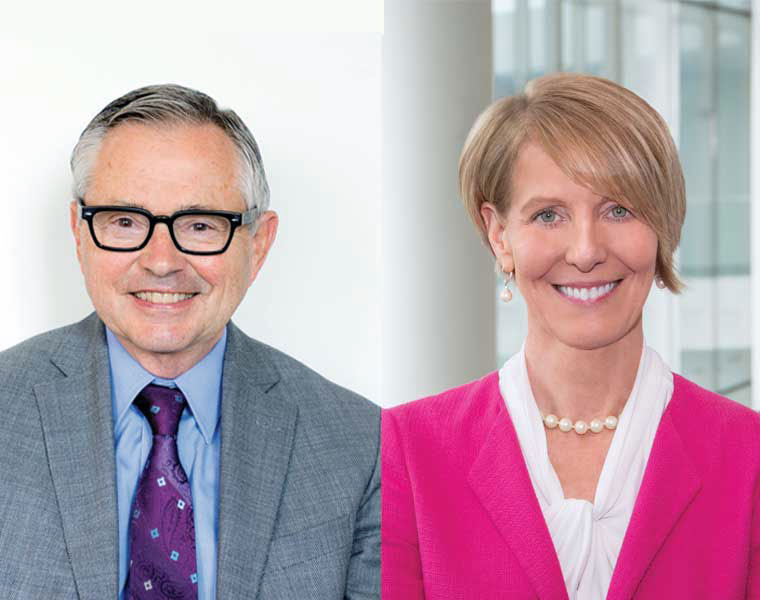 After leading the largest and most successful capital campaign in Case Western Reserve’s history, Bruce Loessin is stepping down as the university’s fundraising leader at the end of this month.

“What an amazing ride that [capital campaign] has been,” Loessin said in thanking the university relations and development staff who gathered last week, calling them “the team that wouldn’t quit.”

When Loessin joined Case Western Reserve in 2007, it marked the start of his second stint on campus. He first joined the university in 1991, leading its previous capital campaign, which ran from 1989 to 1994 and raised over $400 million.

This most recent campaign, which ended with the 2018 calendar year, closed with more than $1.8 billion in gifts and pledges.

“I am grateful that Bruce returned to Case Western Reserve to provide overall leadership and expertise for our campaign and to build an outstanding development team,” President Barbara R. Snyder said, citing his “unwavering commitment, remarkable experience, and exceptional leadership.”

Between both of Loessin’s campaigns, the university raised support for 18 buildings or major capital projects, including the Veale Convocation, Recreation and Athletic Center, the Kelvin Smith Library, the Tinkham Veale University Center, the Larry Sears and Sally Zlotnick Sears think[box] in the Richey Mixon Building, and the Milton and Tamar Maltz Performing Arts Center. The most recent campaign also saw contributions to 98 endowed professorships as well as more than $250 million for scholarships. For the 2018 fiscal year, donors committed $208 million to Case Western Reserve, the first time the university ever topped the $200 million threshold. The year before Loessin arrived, annual fundraising totaled $68 million.

The Forward Thinking campaign was so successful that this spring Moody’s raised the university’s outlook from stable to positive, an improvement that took 11 years to achieve. The assessment by companies such as Moody’s and Standard & Poor’s not only influences borrowing rates, but also affects the institution’s reputation more broadly.

Moss’ leadership of fundraising for the schools of nursing, dental medicine and medicine contributed significantly to the capital campaign’s success; all told, their supporters contributed $800 million. Along the way, each school set and broke several fundraising records, and the medical school increased its original goal from $350 million to $500 million.

“Carol is always thinking of innovative ways to take our development efforts to the next level,” President Snyder said, noting that, as of April, all three schools are ahead of the last fiscal year’s fundraising tally. “While it is difficult to succeed Bruce, [she] is exceptionally well prepared for the challenge.”

Moss came to Case Western Reserve in 2011 after leading fundraising at the University of California at San Francisco and, before that, at Cleveland Clinic—where she also succeeded Loessin in the leadership role. In addition, Moss worked in development at the Ohio State University and Case Western Reserve’s Case School of Engineering.

“It’s humbling and a little daunting to succeed such an incredible leader,” Moss said. “It will be an honor and a privilege to work with everyone to build on this success.”

Loessin, meanwhile, will continue to work on selected projects for the university as special assistant to the president.