Case Western Reserve University equipment manager Hugh Marshall, who touched the lives of thousands of members of the community during his over-30 years of service to the campus, passed away Thursday, June 14, at the age of 65 after a battle with cancer.

“Hugh inspired generations of Spartan student-athletes,” said CWRU Director of Athletics Amy Backus. “He did so with his gentle nature, good humor and extraordinary work ethic. He was a man dedicated to his work and we will miss his presence on the sideline, in the locker room and in our hearts.”

Marshall was a lifelong resident of Northeastern Ohio, growing up in Chesterland. He was a 1971 graduate of West Geauga High School, where he was a member of the school’s football team, while also working as the squad’s equipment manager. He continued to work at his alma mater, serving through this past season as the scorekeeper for West Geauga basketball games. 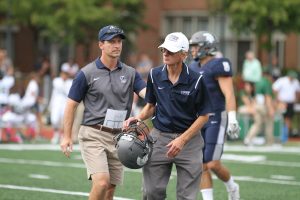 Otto Penicka, who joined the Department of Athletics & Physical Education shortly after Marshall and had known him since meeting on the sidelines of a West Geauga-Newbury High School scrimmage in 1969, said: “His love of West Geauga was unprecedented. It’s like his heart never graduated from high school.”

After high school, Marshall went on to attend Kent State University, where he graduated in 1975 with a bachelor’s degree in business administration. He returned to work as a subcontractor for the athletics programs and an assistant football, women’s basketball and track coach at West Geauga from 1983 through 1987, when former Spartan football coach Jim Chapman, then working at  West Geauga, recommended him for a position at CWRU as the athletic equipment manager. Marshall joined the CWRU athletics staff in November of 1987, and was the department’s most tenured member at the time of his death. His responsibilities over the years were wide-ranging, including handling the athletic equipment and uniforms for CWRU teams, serving as a gameday event manager, and field maintenance.

Through his responsibilities, he made lifelong friendships with the students he worked with, reaching well beyond the varsity athletes.  He developed special relationships with a number of the Greek organizations on campus, in particular Phi Gamma Delta (FIJI) and Phi Mu.

This past season, on Oct. 14, Marshall was on the sidelines for his 300th-consecutive CWRU football game, a 63-28 win at Thiel College in Greenville, Pennsylvania, and went on to participate in 306 straight Spartan football games by the end of the year. 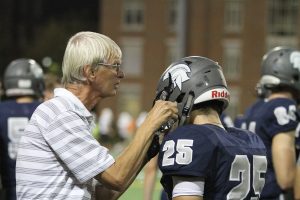 “Hugh may have touched more lives on campus than any other CWRU employee over the past 30 years,” said CWRU Head Football Coach Greg Debeljak. “Every Spartan athlete knew and liked Hugh, and he always had a friendly word for anyone who he came across.”

He was recognized for his 30 years of service at the Department of Student Affairs’ end-of-year celebration in May. Marshall’s unwavering support of the athletic program at Case Western Reserve helped immeasurably improve the collegiate experience for countless students over the last three decades.

Marshall is survived by his older brothers Bill and Craig, and his younger brother, David. A memorial service open to the public will be held at Horsburgh Gymnasium in the Veale Center on the campus of Case Western Reserve University Saturday, June 23, from 2 to 3:30 p.m.